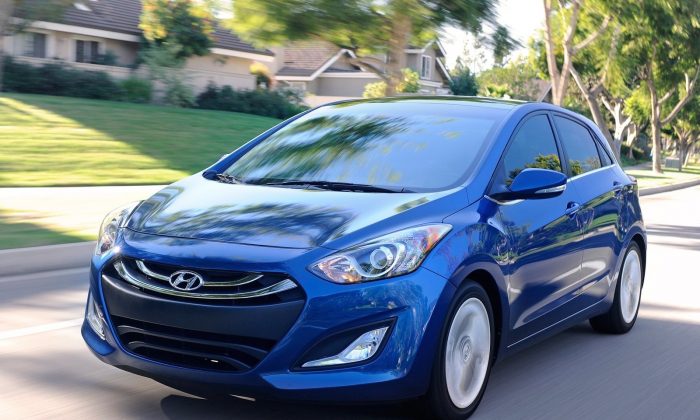 With “GT” attached to the name of Hyundai’s new Elantra hatchback released last year, there was a certain expectation of performance that wasn’t quite fulfilled. Fortunately for the 2014 model year, it gets a kick in the pants with a more powerful 173-horsepower Gasoline Direct Injection (GDI) engine dubbed simply “Nu.”

The GT is the outwardly sportier Elantra when compared to its sedan sibling. Several car companies are now adopting a design philosophy of making a car look like it’s forever moving, and Hyundai calls theirs Fluidic Sculpture. Check out the chiselled fender bulges and curving creases in the door panels and you will know what I mean. It’s a little harder to make out on certain colours, like the Windy Sea Blue on my press car, but I prefer the darker, more mysterious-looking silhouette.

The front end provides the most interesting view of the vehicle. Rather than going with conventional mesh, the grille has chrome slats (SE trim) that curve upwards. The whole thing is integrated into the bumper that has slats of its own curving the opposite direction. Handsome projector headlamps and big fog lights round out the package.

In comparison, the interior has pretty normal fare. On the SE, seat surfaces are finished in hard leather, and you get automatic climate control, an auto-dimming mirror, power windows, and push button start as standard. The audio system is equipped with XM Satellite Radio, which I found surprising given how basic the two-colour interface looks.

There is a seven-inch touchscreen navigation system with rearview camera available, but that costs an additional $2,000. The way the dash is oriented, even with my long limbs I had to stretch a ways to reach the system controls on the far side of the screen. Also surprising is the addition of a power driver’s seat with lumbar support and a gorgeous panoramic sunroof on the GLS and SE.

I would have liked to really wind out all 173 horses with the six-speed manual gearbox that comes on every model other than the SE, but I made do with the six-speed auto. I had no complaints about the shifts that were precise, and there is the option for manual control by nudging the gear lever to the right of Drive mode.

The revised 2.0 litre powerplant generates 25 more horsepower and 23 more pound-feet of torque than the old 1.8 litre, a big difference you can really feel when you take the car on the highway. The ride is smooth and quiet, partially due to the engine’s maintenance-free silent timing chain system eliminating the whirring of a belt-driven setup.

Instead of being tuned for comfort like the sedan, the GT (based on the European-market Hyundai i30) has a stiffer suspension that allows it to corner flatter with more stability at higher speeds. Matched up with the Driver Selectable Steering Mode (DSSM) in the Sport setting, the hatch is actually quite a treat to drive on winding roads. When the laneways straighten out, drivers can switch the DSSM to Comfort or Normal, loosening up the steering feel for easier negotiation in the city.

Starting at $18,349, the Elantra GT stacks up well against competitors like the Ford Focus, Mazda 3 Sport, and the Subaru Impreza, besting them in categories such as power and cargo capacity. The example that Hyundai served up last year was already good, but throwing in a “Nu” engine just might put it over the top for a lot of consumers.