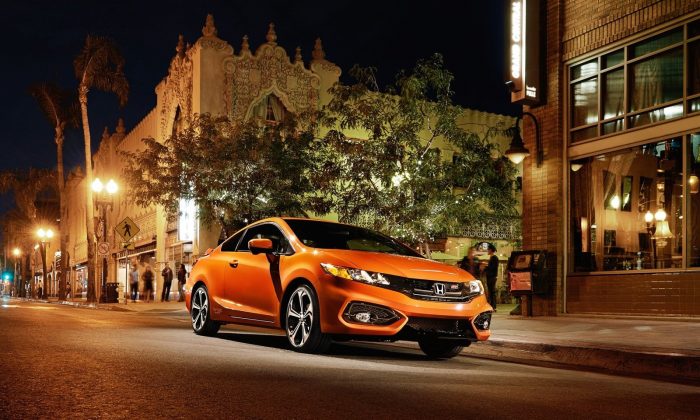 The slightly reworked 2014 Honda Civic Si is not about horsepower and straight ahead performance. The Si version of the popular compact Civic has always been about a total performance package. And that objective remains the same for 2014 as Honda ups the ante by hardening the Si’s performance personality.

The high-revving 2.4L 4-cylinder engine has been endowed with four additional horses and four more pound-feet of torque, bringing the respective totals to 205 and 174; the extra grunt is due to a retuned exhaust system. Also, the suspension has been revised with higher spring rates, new dampers, and a stiffer rear-stabilizer bar. The Si now comes with 18-inch alloy wheels (an inch bigger than last year), foglights, a rear spoiler, a limited-slip front differential, and front and rear styling tweaks.

The Civic Si is offered in two styles, the more traditional coupe and a sedan, which we think is the more practical way to go. You trade the cramped rear accommodations of the two-door for much needed space without giving up any of the fun-to-drive aspects of the hot Honda. When you’re not carving up back roads on the weekend, the Si can serve very nicely as family transportation.

Outfitted with one of the slickest shifting six-speed manuals in the business—the only transmission available on the Si—the new sedan proved a delight on our usual “test tracks,” offering a nearly identical experience to the coupe. It proved a blast to row through the gears and wind out the extremely willing 4-cylinder to its screaming 7,000 rpm redline.

While low-end torque is not abundant, the Si acquits itself adequately with a published 0-to-60 time of 6.1 seconds, and with virtually no torque steer. The slower-than-a-WRX label never bothered us because the Si is quick enough if you muster the courage to keep your foot in it. And unlike the new Subaru WRX that has wimped out in 2015 with an optional continuously variable transmission, the Si stays true to its mission with the manual-only shifter.

Inside, Si-exclusive seat fabric and trim is enhanced with a sport-oriented black and red color scheme, and the audio panel has received a high tech, race-inspired, carbon fiber-style design. The Si sedan adds as standard equipment Honda’s new 7-inch Display Audio touchscreen, which uses a smartphone-like interface. The display is also the interface for the next generation HondaLink, the application based platform that connects customers to smartphone-provided online content both inside and outside the car. Also standard on the 2014 Si is the Smart Entry with push button start, expanded view driver’s mirror, and the Honda LaneWatch display.

Most of the cabin’s switchgear is well-placed, but the audio controls proved to be irritating to use. The once simple task of setting a radio station requires you to jockey back and forth between searching and setting. The lack of a tuning knob doesn’t help matters, nor does a touch-slide bar for volume. The saving grace is the intuitive steering-wheel-mounted audio controls, which came to our rescue. Our question, do the people designing these modern systems ever drive the cars that come with their so-called “upgrades?”

The Civic Si starts at $23,580 for the coupe and $23,780 for the sedan. Our Si with navigation carried a bottom line of $25,280 including destination charge. Standard safety features on the Si include rearview camera, right-side blind-spot camera, and a HondaLink system that includes emergency crash notification.

Civic comes in several other appealing variants including the standard 1.8L 4-cylinder engine, that puts out 143 horsepower and 129 pound-feet of torque, mated to a CVT. Gas mileage is rated at 30 city, 39 highway. A hybrid Civic is again offered with a 1.5L 4-cylinder, an electric motor, and a lithium-ion battery pack good for 110 horsepower and 127 pound-feet of torque.

Outstanding fuel economy is measured at 47 highway and 44 city. A natural gas-powered Civic is also available in certain areas of the country.

It doesn’t get much better than the Civic for the combination of performance, gas mileage, and interior style and sophistication. Standard equipment across the lineup starting at $19,180 for the coupe and $19,980 for the sedan includes full power accessories, air conditioning, tilt and telescoping steering wheel, cruise control, rearview camera, Bluetooth phone connectivity, and a four-speaker sound system with CD player, audio jack, iPod/USB audio interface, and Pandora functionality.

While the Civic offers something for a wide range of buyers, our vote goes to the delightful Si that offers the combination of a fun-to-drive sports sedan and the practicality of a family hauler.