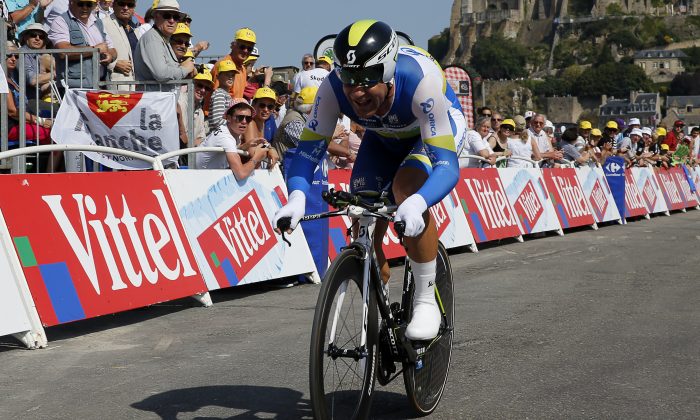 The 2014 Giro d’Italia started Friday before a huge crowd of enthusiastic Irish fans, but the weather wasn’t friendly.

The first of the three 21-stage Grand Tours cycling races of 2014, the Giro d’Italia starts in Ireland this year, with a team time trial in Dublin and two road stages, one a loop starting and ending in Belfast and the other from Armagh to Dublin. Then the race moves to its more normal domain of Italy, where the remaining 18 stages include two individual time trials and five extremely tough mountain stages. It is the first time the Giro has started off the continent.

The Irish weather had a hand in deciding the winner of the team time trial, which determined who starts in the race leader’s pink jersey.

The Australian squad set a time of 24:42 over the 21.7 km course, helped by half their run being on dry roads.

The rain moved on and the roads started drying halfway through the stage, so the later teams had increasingly better conditions, and generally times to match, but the roads never completely dried and none of the other teams could match Orica-GreenEdge.

Orica’s Canadian rider Svein Tuft, who was celebrating his 36th birthday, was awarded the Maglia Rosa, the pink leader’s jersey.

“It’s an amazing day,” Tuft to EuroSport. “It starts out with a lot of stress and I’m like, this is a pretty crazy way to spend your birthday, and then to finish on that note—what a treat! I can’t thank my team enough for giving me that opportunity— it’s a once in a lifetime for a guy like. What a fantastic team!”

The leader’s jersey goes to the first rider across the line; Tuft’s teammates must have planned in advance to let him lead to the finish line just in case. It could not have worked out better. As a workhorse in the team, the odds of him ever winning a stage, let alone a leader’s jersey, are astronomical. His teammates saw the opportunity and took it.

“This team is really sefless that way,” Tuft concluded. “I feel really fortunate to be given this gift on my birthday.”

The rain really hurt the normally quick Katusha team, which rode through the worst precipitation and took 26:25 to complete the course. Katusha’s General Classification contender Joaquim Rodriguez will have to start the road stages with a hefty deficit to his adversaries.

Garmin Sharp was also hit hard by the weather. Garmin rider Dan Martin, hit a slippery metal drain cover and slammed to the pavement, apparently breaking his collarbone. The next three riders rode over him, unable to stop.

Rules specify that the team’s time is taken when the fifth rider crosses the line. Garmin had already dropped one rider before the crash; they four who remained upright had to wait while the team car brought enough spare bikes and made enough repairs to get five riders back on course.

U.S. rider Tejay Van Garderen, Garmin’s contender for the overall win, saw his chances evaporate. Not only did he lose a trusted lieutenant, he lost three minutes waiting for the mess to get sorted out.

BMC was the team considered most likely to threaten Orica in the team time trial. The roads were only damp by the team BMC started, and even with that slight setback the U.S.-based squad came tantalizingly close, losing only seven seconds to their Australian competitors.

Tinkoff-Saxo had a chance to win the stage, but they started right after Orica, and had worse conditions. They ended up fourth.

England’s Team Sky finished fifth. This squad has been decimated by injury and illness in the early part of the season and Ritchie Porte, who was picked to lead the Giro squad, had to skip the race.

Astana, Kazakhstani team of the 2013 Giro winner Vincenzo Nibali, started second to last. Despite Nibali not being there—he is saving his legs for the Tour de France—Astana came with a strong squad, but ended up sixth.