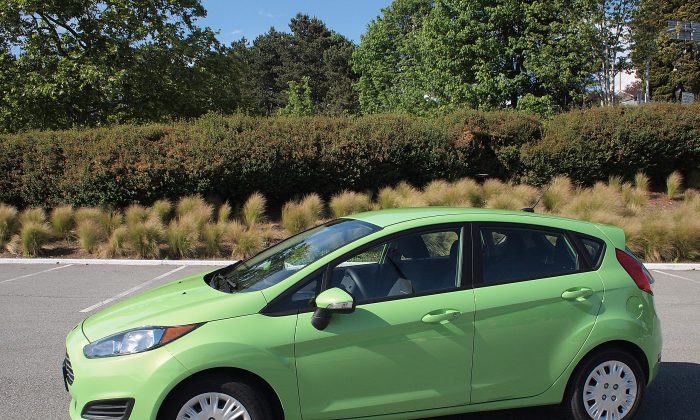 From a company that once valued big power from big engines, Ford has been changing with the times by focusing development on compact, turbocharged engines in their EcoBoost lineup. The latest example to hit North American shores is the 1.0-L EcoBoost found in the equally compact redesigned 2014 Ford Fiesta SE, available in sedan or hatchback.

Normally offered with a standard 1.6-liter four cylinder, the 1.0 only has one fewer cylinder—a first for the company—while maintaining a respectable power output of 123 horsepower and 148 pound-feet of torque (on overboost). Both share the same great looks with some additional eco badging on the sedan/hatch lid for the latter—my test vehicle came in sprayed in a fitting neon “Green Envy” metallic colour.

This year’s models have the universal Ford big mouth grille, slightly more angular headlights, and a new front bumper design with flared corners making it look like it has a built-in front lip spoiler. Without the optional Appearance Package that adds 16-inch alloy wheels and foglights, however, the Fiesta doesn’t look quite as feisty as it could.

The interior was slightly bland as well, minus the extras that would have included a leather gear knob and sport cloth bucket seats. Given my experience with other recent Ford products, I wasn’t too saddened by the lack of the SYNC with MyFord Touch system that can be frustrating to operate. The basic non-touch sound system was actually fairly easy to use despite an odd looking layout resembling a pair of wings, with category buttons on one side and an out-of-place keypad on the other.

The real buzz about this car isn’t in the aesthetics so much as the highly touted engine. Having driven other three-cylinders I didn’t have huge expectations from the tiny displacement mill, but there had to be a reason for all the accolades that had been given in the two years it has been available in other markets before arriving here. In fact, just recently I was reading another press release titled “Ford 1.0-Liter EcoBoost Engine Wins Unprecedented Third Consecutive International Engine of the Year Honours.”

Benefiting from new technologies like a variable oil pump, split cooling system, and smaller turbocharger, the 1.0 L is able to surpass the power output of the 1.6 by three horsepower. From a standstill, I shifted into first and mashed the gas, turbo kicking in and all 148 foot-pounds coming alive at 5,000 rpm.

Going uphill was a slightly different story, though. Navigating some steep uphill grades in town, I could feel the Fiesta bogging as it tried to climb what might as well have been the side of a mountain. After adjusting my driving style and throttle modulation somewhat it got easier.

As of now, a five-speed manual is the only option so consumers will need to know how to drive stick if they are to take one out for a test drive. I couldn’t help but make comparisons to the Fiesta ST I drove earlier in the year, and non-ST felt much more vague and imprecise during gear changes.

As you might expect, the fuel economy of the 1.0 L EcoBoost is superb. I did not drive conservatively over the week of testing by any means, and my average was 31.4 mpg for combined city and highway terrain. The other big selling point of this mid-level vehicle is of course its price, starting at $15,580 for the base SE sedan and $16,080 for the hatchback. A downside for some people might be the lack of space, but if you can wait, the one-size-bigger 2015 Ford Focus is coming equipped with the same motor.