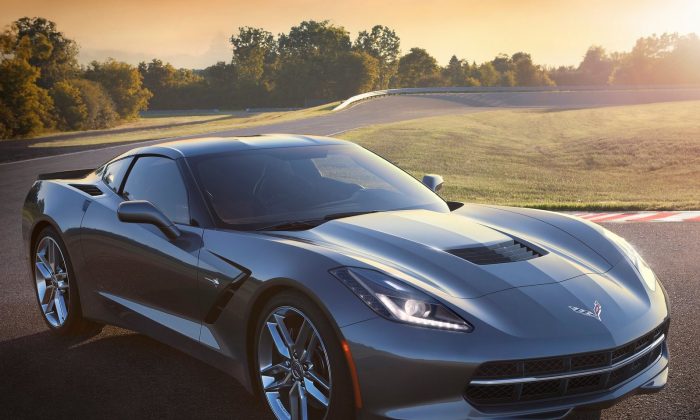 It’s a joy watching the looks on Corvette enthusiast’s faces as the next chapter in a revered history washes over them. Books will be written. Collections will be joined. Races will be won. Fantasies will be fulfilled. All journalists, when asked what they thought of the seventh-generation (C7) 2014 Corvette during its Detroit auto show premiere last January; paused, took a deep breath, then slowly let it out before answering. It’s that hot.

Enthusiasts “armchair quarterback” each stylistic choice. By far the most controversial feature of the new Vette is its quad rectangular taillamps. I prefer four round lights, but LEDs give the rear a futuristic finish and I’m growing to love them. The car’s shape is incredibly aggressive, but recognizably Corvette.

Designers broke with recent tradition by trashing the glass hatch, and instead penned proper windowlines and subtle flying buttress styling. Both the hood and removable targa roof are carbon fiber.

Looking over a Corvette’s bulging fenders from behind the wheel is unrivaled, but Corvette rarely enjoyed interior refinement the equal of its performance. With relatively-affordable prices, you could always convince yourself that “compromises had to be made somewhere.” Like heck. No more excuses.

A choice of two multi-adjustable seat designs should silence critics of the old flabby chairs. Stitched dash and door materials impress, as do authentic aluminum and carbon fiber trim. Peeling off Benjamins allows owners to upgrade from plain black to an array of colors and trims. Mercifully, Corvette drivers no longer have to suffer a Chevy Cobalt’s steering wheel; the new multi-function, leather-wrapped gem is near-perfect.

Corvettes are about feeling like you’re driving high-tech machines. In the Stingray, drivers can reconfigure their LCD instrument cluster with a selection of gauge layouts, swipe through the gesture recognition touchscreen, and choose from several colors of heads-up displays.

Corvettes once had a reputation for being cramped, noisy, and rough-riding. Not so anymore; semi-reclined seating relieves stress, luggage space is ridiculous for a two-passenger car, and build quality is unshakable. A rear camera helps, but be careful of blind spots created by the new side profile. I’d still drive one to Mars.

Twenty years ago, the legendary “King of the Hill” Corvette ZR-1 had 405 horsepower. Weak! The C7 6.2-liter V8, with variable valve timing, direct injection, variable-displacement (runs on four cylinders at cruise to conserve fuel), and none of that 32-valve nonsense delivers 455 horsepower (460 with free-flow exhaust) and 17/29 mpg city/hwy. That’s adequate to run 0-60 mph in 3.8 sec. Not satisfied? Next-generation Z06 and ZR1 models are still being developed.

Beyond thrust, engineers refined the car’s chassis and steering to be more precise. A knob in the center console selects from five driving modes: Weather, Eco, Tour, Sport, and Track. Each adjusts the gauge cluster configuration, electronic stability control, variable-displacement, exhaust sound (try it in Track mode to wake Jimmy Hoffa), steering effort, and Magnetic Ride Control suspension damping. The car can transform from a low-effort commuter to weekend track star that achieves 1.03 g of cornering grip with the twist of a knob.

Corvettes must evolve to stay relevant. Think of how earlier generation Vettes departed from their predecessors. My ‘80s-vintage C4 was highly criticized for its aerodynamic body and digital gauges (imagine!). The C7 designers did not settle for another trite update. While respecting history, the C7 is cutting-edge, relevant for a new generation of buyers, and renews a bloodline that has survived over 60 years.

One of the best moments during the launch party for the C7 was walking around the car while chief designer, Tom Peters, was standing quietly gauging reactions. By then, I could honestly tell him I liked the taillamps, and he spent considerable time explaining their shape, depth, and lighting technology. No decision was made lightly. No decision on a Corvette ever is. Amazing. Beautiful. Breathless.