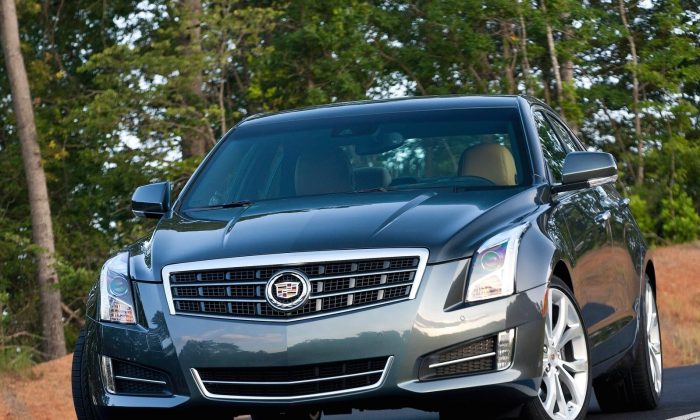 The opening line in a news release describing the 2014 Cadillac ATS is that it “challenges the world’s best premium cars.” Although it doesn’t directly name who is at the heart of that challenge, think BMW, Audi, Mercedes-Benz, et al. And considering what they’ve accomplished with the compact luxury sports sedan that launched last year (coupe version coming soon), it lives up to its claim.

It’s hard to describe how looking at the ATS makes me feel. It somehow manages to appear classic and progressive at the same time with its bold chunky lines and wide cruiser stance, combined with futuristic headlights that stretch back almost to the halfway point of the front fenders. There is great attention to detail, like the shutters hiding behind the large two-slat grille housing the big Cadillac emblem that can close to reduce drag and increase fuel economy.

The rearview mirror, revised for 2014, is now just a frameless chiseled piece of glass floating below the windshield like a fine pair of Italian eyewear. On models equipped with paddle shifters, such as our Luxury Collection press vehicle, there is a new thicker leather sport steering wheel with a multitude of buttons for cruise control, voice activation, and most importantly, audio.

I say that because the available CUE—that’s Cadillac User Experience—infotainment system doesn’t use buttons in the traditional sense. As with many other manufacturers, many functions once activated and deactivated by physical dials and switches are largely now handled on the touchscreen. There are what appear to be buttons underneath, but they are just metallic protrusions that sense touch and offer haptic (vibrating) feedback to let you know you’ve successfully pressed it.

It sounds simple, but just to lower or raise the volume I had to press multiple times to get it to register. A pointy piece of metal resembling the front hood crease is cool, but not enough to justify replacing the simplicity and immediacy of a knob.

I ended up turning off the radio and focusing on the driving experience, which is fantastic. Optional all-wheel drive, balanced weight distribution front and rear, a low curb weight of 3,300 pounds and the earlier referenced wide stance give the Caddy taut and responsive handling. Five-link independent suspension, a first for the upscale brand, keeps every corner firmly on the road at all times. Be warned, the ride leans towards being stiff and can be unforgiving over stretches of uneven pavement and the potholes that tend to pop up everywhere in the spring.

Seamless shifting six-speed Hydra-Matic (auto) transmissions are standard all around except for the choice of a manual—only available with the turbo motor. Turn on Sport mode using the toggle located under the gear lever, which alters the shift algorithms to a more aggressive pattern, and feel the ATS instantly go from tame to twisted. There is also a Snow setting that should come in handy when conditions get icy.

One step below the Premium Collection trim, our V6 RWD Luxury model retails for $42,020 before options and out-the-door charges. As well equipped and performance-ready as any of the competitors it’s stepped up to, what are other upscale marques prepared to do to answer the challenge?