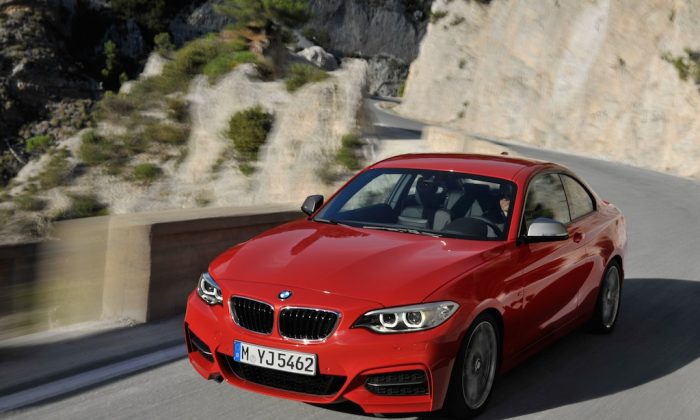 Designed to challenge the Audi S-line in price, the 2014 BMW M235i captures the essence of BMW’s high-performance models in a less-expensive car without being a real M-model. Confused? So are most people.

The M 235i is the preliminary top model of the new series of 2. Technically it is closely related to the 1 Series, yet it is eleven inches longer, a little flatter and especially wider. And as always with coupes of course also more expensive. Despite the slightly grown body the 2 is not really heavier in comparison with the 1 Series. A start-stop system is standard equipment.

The M235i comes with a 320-horsepower, turbocharged 3.0-liter six-cylinder engine achieving 330 pound-foot of torque. The M235i accelerates from 0 to 60 mph in 4.8 seconds and has an electronically blocked top speed of 130 mph.

The BMW 235i M is not for the faint of heart. And be alarmed, be very alarmed: It even makes a defensive driver into a heater. For when once the harsh sound of the straight six-cylinder engine meets the narrow and dark cabin and the needle of the tachometer jerks through the field of view, it is there: the feeling of sitting in a small rocket. With a far lower center of gravity and balanced weight distribution, a very direct steering, strong brakes and a suspension that shatters your bones, this is an extremely precise car.

Sure, one could put the so-called Driving Experience Control switch on “comfort” or “Eco” – but then you might as well take the bus. For in this case one does not understand the appeal of this car, which is positioned much closer to the original understanding of the driving pleasure of a BMW and rear-wheel drive than about the current 3 Series or the new M3.

The BMW 235i is BMW’s purest, most uncompromising coupe. It’s been engineered first and foremost spirited driving. Once taken into its natural habitat, windy roads, you will discover a turbo-charged tenaciousness that is oh-so-addictive.

Not a Family Car

The driving fun in the M 235i could be a pretty solitary pleasure. The space in the rear is too short and limited to make this a car too share with your friends – let alone your family.

Where Have All the Extras Gone…?

BMW is not known for overly impressive interiors, and the BMW M235i continues in the heritage line. Yet for the luxury price-tag of $46,575 even a Spartan won’t be too impressed: Where have Navigation, Bluetooth-Streaming Audio, Smartkey-Entry or a Rearview Camera gone? Look into BMW’s catalogue of pricey extras and you’ll know.

Click here for 5 Things to Know About the BMW M235i