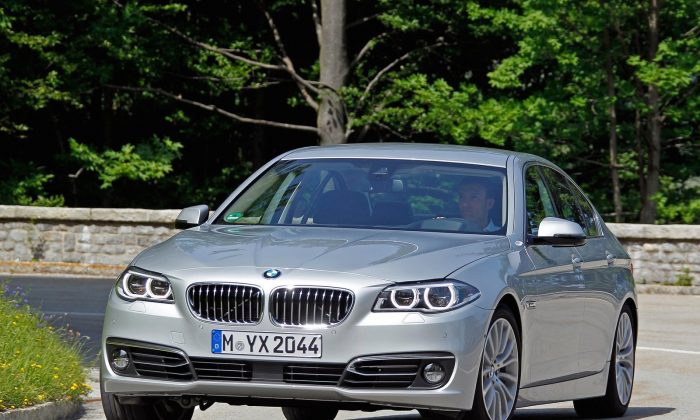 Diesel engine technology is advancing at turbocharged speeds with engines becoming cleaner, faster, and more fuel efficient. And the public is finally taking notice, as recently pointed up by statistics from Diesel Technology Forum showing that diesel car sales increased 25 percent during the first six months of 2014.

European automakers are at the forefront of this surge in U.S. customer acceptance turning out astoundingly good engines led by Audi, Mercedes-Benz, BMW, and Volkswagen. We were given a lesson in just how far removed modern diesel engines are from the old days of smoky, smelly, slow-moving oil burners when we each spent a week behind the wheel of the all-new BMW 5-Series diesel, the 535d.

The current 5-Series is an outstanding mid-sized luxury car in any guise, but BMW’s new turbocharged 3.0-liter diesel inline 6 producing 255 horsepower and 413 pound-feet of torque mated to an eight-speed automatic transmission adds to the luster of this popular brand. Not only is it fuel efficient, quiet, and devoid of all things stereotypically diesel, it is a performance beast on the highway.

Crank up the 535d and you will have to strain to hear the once-normal diesel clatter. Hit the gas and you will discover very quickly that the engine’s 413 foot-pounds of torque deliver in a big way beginning at just 1,500 rpm. The 255-horsepower peak comes at just 4,000 rpm resulting in a 0-to-60 time of around 5.5 seconds, quicker even than the gas-engine 535i. Granted, things taper off as speed increases, but the BMW diesel still accomplishes a quarter mile in a relatively quick 14.2 seconds at 97 mph.

That’s stellar performance when you factor in EPA-rated mileage of 26 city, 38 highway and 30 overall. (We managed 33 mpg in mixed driving.) You get the advantages of driving nearly carbon-emissions free with hybrid-like gas mileage, but without the necessity of driving like grandma on her way to church. Drive like you’re trying to outrun an army of zombies and fuel efficiency will suffer very little.

While we wouldn’t put the 535d into sports sedan territory, it still holds its own in traditional BMW fashion on winding back roads and two lane highways. The sedan is well balanced with little body sway when cornering at higher speeds, and the electric power steering is very accurate.

The 5 Series comes standard with BMW’s Driving Dynamics Control, which alters the engine, steering, and automatic transmission response based on driver-selected settings. And all 5-Series sedans come with stop-start technology designed to save gas (or in the case of the 535d, diesel fuel). We found the system not quite ready for prime time with jolting restarts. We soon found the button to disable the feature and then rejoiced in pleasantly smooth take-offs.

The interior is very quiet and very pleasing to the eye. As you would expect from a car starting at $57,626, the cabin boasts top-quality materials including first-class leather and real wood, and the latest in electronic equipment. Perhaps we’ve become familiar over time with the intricacies of BMW’s iDrive electronics interface to actually find it somewhat intuitive, but it may prove complicated for the uninitiated. And like so many automotive systems in a world of rapidly expanding infotainment features it can be distracting while driving. One thing we have found over the years is that BMW has an aversion to the increasingly popular satellite radio. Many vehicles under 25 grand now offer SiriusXM radios as standard equipment, but to obtain it in the 535d you must opt for the $1,500 Premium Package.

The front seats are comfortable, and backseat passengers will find an abundance of stretch-out room. It proved easy to gain an optimum driving position with the standard 10-way power seat (the front-seat passenger also has the advantage of 10-way power). If that’s not enough, $2,400 will purchase the Luxury Seating Package with 20-way front power seats. Trunk space is okay for a mid-sized luxury sedan measured at 14 cubic feet.

BMW has got safety relatively well covered with all the usual stuff including a full selection of airbags, stability and traction control, antilock brakes, and active front head restraints. Unfortunately, a blind spot warning system and a rearview camera are optional equipment. We think those features should be standard on all vehicles, especially high-priced luxury automobiles.

Our rear-drive test vehicle with a handful of options carried a bottom line of $60,050. Note that there are a myriad of options available, many of them desirable—including the $4,500 1,200-watt Bang & Olufsen audio system—that can run the cost close to 70 grand and then some.