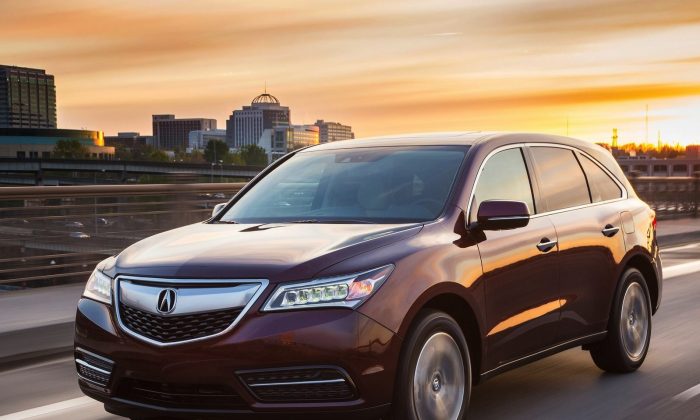 While Acura trimmed some significant weight from the latest version of its best-selling MDX crossover, it also cut horsepower and subtly advanced the design. This may sound like playing it too safe with the all-new third-generation, but we discovered that Acura actually took a solid step forward. The proof is in the details—and the driving.

We think the new MDX is a stroke of engineering genius, taking a very good luxury crossover and making it better in virtually every area through the use of selective changes and updates that don’t necessarily translate into greater horsepower or revolutionary new styling.

Perhaps the biggest change is that the MDX no longer rides on the Honda Pilot platform, using an all-new purpose-built platform, and it’s evident in its refined driving dynamics and interior solitude.

The new MDX is a little rounder with nips and tucks here and there, and it has a more aggressive look. It’s distinctive enough, and we agree with Acura that this is perhaps the personification of what a luxury sport utility is supposed to look like.

By the numbers, the 2014 MDX measures 2 inches longer than the previous-generation and has a 2.8-inch longer wheelbase. Vehicle height has been lowered by 1.5 inches, and rear step-in height is lower by 1.8 inches. This translates into more interior room and easier entry and exit.

The new 3.5-liter V6 has less horsepower than the outgoing 3.7-liter V6—290 vs. 300—but it feels stronger. Acura says this is due to an 8 percent improvement in low-end torque that cuts a half-second off 0-to-60 time. While we can’t attest to that figure using our experienced seat-of-the-pants measuring device, the 2014 model did feel more energetic, probably in the mid six-second range.

One area that perhaps should have been addressed was the transmission. The new MDX soldiers on with the carry-over 6-speed, certainly up to the task, but we can’t help thinking what a modern 7-speed or 8-speed would have done for performance.

Even so, the benefits of the new direct-injection engine will be felt in a big way at the gas pump. It’s rated in front-wheel drive—yes, the MDX can now be had with the less-expensive two-wheel drive—at 20 mpg city, 28 highway, and 23 overall. The Super Handling AWD is rated at 18/27/21. The outgoing engine is EPA-rated at 16/21/18. Some of the mileage savings come as a result of a healthy diet that has shed 275 pounds from several areas including the structure and interior components, and a 16 percent gain in aerodynamic efficiency.

The MDX has always had an athletic feel, something Acura has become known for, and its handling prowess in the new edition lives up to the billing. Drivers can tailor the vehicle to their driving tastes through the use of three dynamic modes—Sport, Normal and Comfort. These settings change steering effort, throttle response, all-wheel-drive settings, and even noise cancellation for different tastes or driving conditions.

Inside, the MDX is attractive and generally more user friendly than the outgoing model. Instrumentation is easy to read and Acura has eliminated the myriad of buttons found on the center stack of the outgoing model. But this means that more controls are now buried in a seven-inch touch screen that sits below the navigation screen. Hard buttons are still available for controlling temperature, navigation, and radio volume, although we miss the easily accessed radio preset buttons found in the last-generation MDX.

Acura has also created a more passenger-friendly interior. The second-row seats slide six inches fore and aft, and a new one-touch control folds and slides them forward for easier entry and exit to the third row. Storage has been increased and includes a handy under-floor compartment in the rear cargo area and a center console large enough to fit a laptop or purse.

On the pricing side (including destination charges), the new front-wheel-drive model allows buyers to get into the MDX for $43,185, nearly $1,000 less than the 2013 base model. The base price of the all-wheel-drive model is $45,185. Our top-of-the-line test vehicle with all the bells and whistles including the Advance and Entertainment packages carried a bottom line of $57,400.

The MDX with Technology package is perhaps all we would need. It includes navigation, an ear-pleasing 10-speaker ELS surround-sound audio system, 19-inch alloy wheels, rain-sensing wipers, rear-door keyless entry, GPS-linked and solar-sensing climate control, and such safety systems as lane-departure warning, blind-spot warning, and forward collision warning. It goes out the door for $49,460.