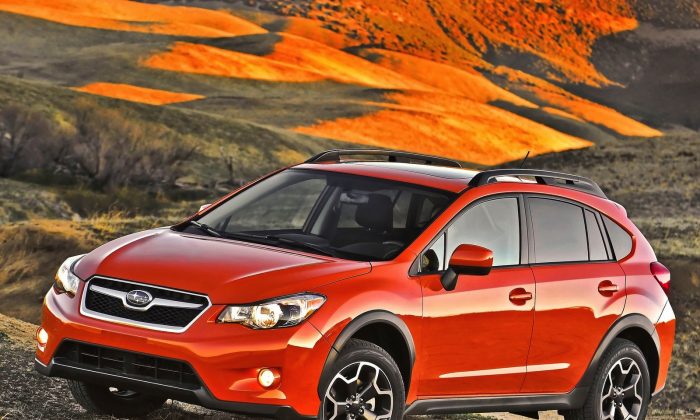 Subaru has, for once, introduced a new model to their lineup that doesn’t leave a first impression of shock and amazement (remember the 2005 Tribeca?) For all intents and purposes, the XV Crosstrek-known simply as the XV in other parts of the world-looks like a natural fit in-between the popular Impreza and the modern soccer-mom AWD favorite the Forester.

Just to be upfront, I admit I am not an admirer of North America’s obsession with the CUV, or crossover utility vehicle. I prefer Europe’s model of producing plenty of small and agile fuel-efficient cars with several different engine options, which we are slowly catching up with; but I digress. The XV should do well to appease the masses with its conforming appearance, ability to comfortably carry five people with plenty of stuff, and competitive fuel economy-especially if they don’t care about the boring interior and lackluster performance.

Two words: Desert Khaki. Two more words: love it. It’s not the color of cargo pants that the name might lead you to believe, but think pastel green or matcha latte powder. To my dismay, the dealer told me that it was their worst selling color thus far, far behind Satin White Pearl and even Tangerine Orange.

Observing the car as a whole, it really does look like a jacked-up and tougher Impreza, which isn’t a bad thing. It sits on what Subaru calls “bespoke” 17-inch alloy wheels that have funky black centers and a cookie-cutter appearance, and also happen to be the most eye-catching exterior feature.

There are fewer embellishments on the inside, where you’ll find all the controls and accessories in their usual spots. On my base model, the plastic steering wheel was well matched by the plastic gear knob that could have been plucked from something made 15 years earlier; yet the door pulls had a chrome finish. On the bright side, the seats, covered in a mesh-like material, are actually quite supportive as I had more than one passenger comment on.

The multi-function display on the dash shows an array of statistical information including a real-time graphical visualization of the AWD system that looks plain cool, even if you don’t know what you’re looking at.

As with all Subarus, expect great traction in virtually all conditions. The 148-horsepower engine won’t blow your socks off, and on my five-speed manual transmission model (also available with CVT) it was a bit of a chore changing gears at low rpm. Once you get going, however, the acceleration isn’t bad with 145 lb.-ft. of torque at 4,200 rpm. The engine makes no attempt to be quiet while driving and has that great Boxer engine rumble from the 2.0 L flat-four power plant.

Aside from a unique sound, the engine also sits lower than other conventional designs allowing you to enter corners with less body roll than similarly larger vehicles.

The cruise control is easy to set via the steering wheel controls and makes long trips down the highway easy. You shouldn’t have to stop for fill ups too often either, with its fuel consumption rating of 23 mpg in the city and 30 on the highway.

So the question is, should you buy it? For a guy who doesn’t typically like CUVs, it would make it on my list of to-be-considered if I were ever in the market. The funny thing is, the Crosstrek’s biggest competitor might be its bigger brother the Forester that starts at the same price of $21,995.

The bottom line is, if you want a car that behaves like an SUV but drives (and looks) like an Impreza, this may be the car for you.

Benjamin is an automotive journalist based in Vancouver, B.C. Canada. You can reach him at benjamin@benjaminyong.ca.