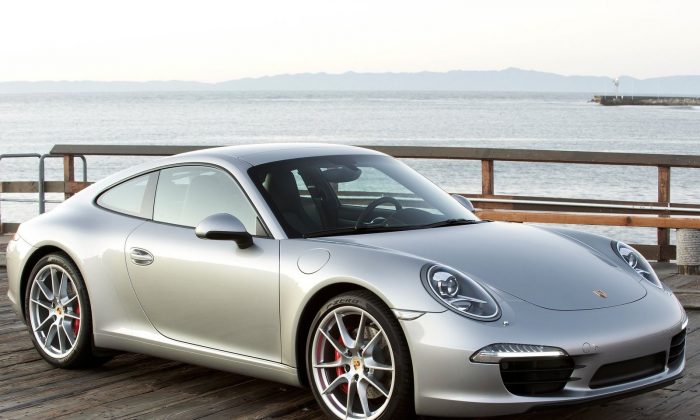 There is nothing in the automotive universe quite like a Porsche 911. The legend of the iconic Porsche since its debut in 1963 continues to grow with the newest iteration, which is four inches longer, has a two-inch wider front track, and is 56 pounds lighter than the previous version without losing any of its classic proportions. Its styling continuity over the span of 50 years is amazing. The timeless design of Ferdinand (Ferry) Porsche lives on in grand fashion.

The seventh generation 911, introduced with the 2012 model, refines the overall driving experience, which is to say a mouthful because there was little wrong with the previous-generation car. You would be hard pressed to find a sports car that melds extraordinary handling, breathtaking acceleration, a spacious cockpit, and everyday usability so well.

The 2013 911 Carrera S handles as well as any car we’ve driven and its road grip is nothing short of outstanding. In the “you could have fooled us” department, the new Porsche comes with electric-assisted power steering, a feature we thought best served in lesser family transportation. No fear, however, the new steering setup is incredible.

Also new is a seven-speed manual transmission that in reality works as a traditional six-speed. The seventh gear amounts to a super overdrive for interstate cruising. And you are locked out of the final gear unless you visit sixth gear first. We discovered to our delight that even in seventh, the Porsche still has decent acceleration. The extra gear is perhaps one reason Porsche was able to accomplish an EPA-rated 27 mpg in highway driving.

While we found the manual very receptive with short precise throws—still one of the finest on earth—the better way to go is with Porsche’s PDK seven-speed dual-clutch automated-manual transmission ($4,080) that we also drove. It shifts faster than even an expert driver moving through the manual gears. For example, in one measured test the Carrera S completed a 0-to-60 run in 4.6 seconds with the manual and in an astounding 3.9 seconds with the automated manual.

There are performance buttons labeled Sport and Sport Plus that when engaged change the shift points for PDK transmission and firm everything up toward race track levels. There’s also a button to make the exhaust note louder, which is addictive. We never leave home without Sport Plus and the sweet exhaust note engaged.

One of the more amazing aspects of the 911 is how spacious the interior is for a sports car with ample room for a big guy. And cargo capacity was adequate using the rear seats, which are too small for human habitation. Fold the seatbacks down and a nice-sized storage space opens up. Good thing, too, because the front-mounted trunk is no larger than an over-sized glovebox.

Instrumentation is first class, and we have always been enamored with the large digital speedometer. Controls such as audio, climate, and navigation are intuitive. We are impressed with the build quality and the impeccably assembled interior. Just about every surface is covered in high-priced leather or material that mimics the good stuff.

This Porsche not only provides an exhilaratingly breath-taking and rewarding driving experience at the push of the accelerator pedal, but luxury details commensurate with its price.

One big disappointment with the 911—there is no rear-view camera available. That’s a great aid while backing up, even in a cutting-edge sports car. Also, there is no blind spot warning system, an invaluable safety feature now showing up on many cars. But other areas of safety are very well covered including a multitude of airbags and huge ventilated disc brakes, which can pull the car down from 60 mph in around 100 feet, but perhaps the greatest safety feature is the car’s agile dynamics.

For 2013, the 911 variants start with the Carrera coupe and convertible powered by a horizontally opposed 3.4 liter six-cylinder engine making 350 horsepower and 287 pound-feet of torque. It starts at a “bargain basement” price of $85,250 including destination charge.

The top two trims are the Turbo and Turbo S, both performance beasts, with 500 and 530 horsepower respectively. They have the capability of achieving 0-to-60 in the lower reaches of three seconds. Starting price is $138,450.