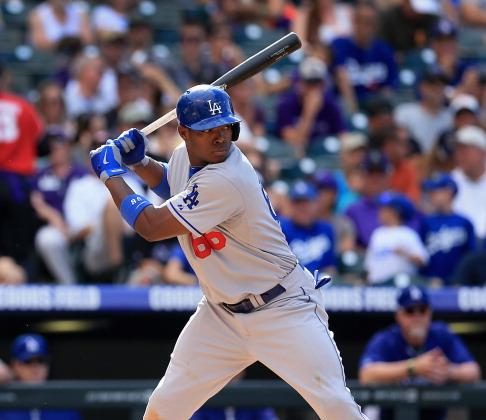 This award is given to the best rookie in the National League. This award has been given to position players and given to pitchers. This is just for the rookie that had the best season among others getting their first taste of the majors.

These are the rookies I think are candidates from the National League:

The size, power and speed of Yasiel Puig are hard to miss. The impact he has made upon his arrival is also hard to miss.

The 19 home runs is third amongst all rookies and his batting average is best amongst rookies. He has had 11 stolen bases but he was also caught eight times. When watching him play, there are some lapses in judgment. There are times when he throws to the wrong base or is too aggressive at times. With a player like Puig, some fine tuning is needed but his energetic presence is valuable enough that you take the bad with the many good qualities he brings.

The Cardinals’ top pitching prospect Shelby Miller hit some bumps in his first full season in the majors but he put together a respectable season. In his seventh start of the season, Miller allowed a leadoff single to Rockies outfielder Eric Young Jr. and he would steal second base. That would be the only Rockies player to reach base as Shelby Miller would retire the next 27 in a row for a complete game, one-hitter with a career-high 13 strikeouts.

In June, Miller would only last 1.2 innings against the Oakland Athletics, probably his worst start of the season. Miller experienced more high moments than low moments and was dependable come the final month of the season. Shelby Miller went 3-0 with a 2.76 ERA. Future is bright for the 22-year-old right-hander.

On a strong rotation that is naturally associated with the Atlanta Braves organization, rookie Julio Teheran had a great first full season. Teheran would consistently give the Braves at least five innings of quality work throughout all 30 of his starts this season.

Despite a 3-2 record, the seven runs he allowed in 32.1 innings in June translated to a 1.95 ERA. His ERA would elevate in the last month of the season but the offense kept him winning with a 3-1 record in September. His ERA in September was 4.44. He never had a season exceed 144 innings so his 185.2 innings this year could have gotten to him towards the end but it was still a great rookie campaign on the National League East champions.

The first import from the Korean Baseball Organization, Hyun-jin Ryu had an impressive rookie campaign as he transitions to his new league and more significantly, his new country.

In his major league debut against the San Francisco Giants, he would allow one earned run but would be tabbed with his first loss. He would get his next win and he would strikeout a career-high 12 in his third career win. He would also record his first career shutout in a win over crosstown rival Angels in May.

He would go a perfect 3-0 in July despite his 4.50 ERA. He wasn’t dominant or overpowering and he did nearly give up a hit per inning but he was an effective pitcher behind the aces, Kershaw and Greinke.

Amidst the fame of Puig, Jose Fernandez gave the few that are Miami Marlins fans something to look forward to. He really provided a fantastic show for fans of baseball to enjoy. The 2.19 ERA is the second best in the league. The .182 batting average against Fernandez is best in the league. He started the season with the team and was shut down with 172.2 innings in 28 starts. For those watching on television, Jose Fernandez was the best all-star they didn’t get to watch. He didn’t let the all-star nod get to his head though as he came out of the All-Star break with three great starts. The last of these three starts was eight shutout innings against the Cleveland Indians with a career-high 14 strikeouts. In the second half of the season, Jose Fernandez went 7-1 with an unbelievable 1.32 ERA. In 68 innings, he allowed just 10 runs to score. The future is very bright for this elite pitcher.

This is likely going to be one of the closest and toughest awards. Jose Fernandez as an individual had a historic season. If he didn’t get shut down, there’s a good chance this is an easier decision. He had the second-lowest ERA in the league and would likely get Cy Young votes for his season. The player that finished in second did well individually but his impact went beyond the statistics.

Yasiel Puig on the Los Angeles Dodgers will finish very close to Fernandez because of the energizing impact on his team. The Dodgers received “Puigmania” like a shot of energy and, along with Hanley Ramirez, fueled the Dodgers to their division title. Shelby Miller had some very impressive starts in a very competitive division. Hyun-jin Ryu had a great rookie campaign but it wasn’t as impressive as his peers. Julio Teheran had similar numbers to Ryu but didn’t have as much consistency and appeared to get tired towards the end of the season.