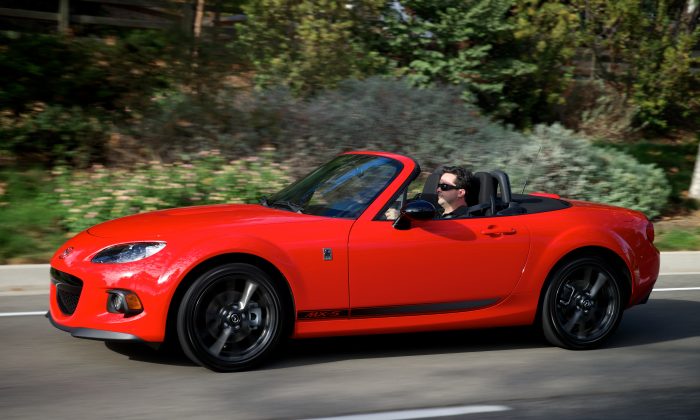 The 2013 MX-5 Mazda Miata Club Convertible I drove recently was too cute for words with its True Red exterior paint job and black cloth top with black wired stitching inside the two-seat compact car. While I knew it was adorable to look at, I wasn’t sure how well it would handle on the road. I did like the fact that it came with manual transmission, since automatic transmissions seem to be the new norm. Personally, I love the control that comes from switching my own gears when and where I feel like it.

Even more exciting, the little Miata proved to be a great deal of fun to drive. Zipping in and out of traffic on the freeway, and snuggling into tight parking spots that looked like only a motorcycle might fit in the space, were added benefits that I wasn’t expecting.

The Miata emits a very satisfying engine growl to let other drivers know you are on the prowl. However, it’s wise to keep that growl at a low murmur in town. My 6-speed manual transmission model was equipped with an Induction Sound Enhancer (ISE) to yield “more attractive engine sounds …heard at a satisfying volume without resorting to simply being loud, obtrusive noise,” according to press materials.

Gas mileage wasn’t bad for such a sweet ride, averaging 24 mpg with 21 in town and 28 on the highway. And the price is affordable for such an appealing vehicle (even though it will only hold one passenger), with a MSRP of $26,705. Anyone who likes convertibles and driving a manual transmission will be especially happy with the Miata Club, powered by a 2.0L DOHC 16-valve 14 VVT engine with 6-speed manual transmission, rear-wheel drive, front and rear stabilizer bars, shock tower brace, and 17-inch alloy wheels.

I still remember the first time I saw a Miata convertible, back when a friend who worked for a local newspaper purchased one of the first to enter the market about 20 years ago, and wishing it was mine. However, at the time I was relegated to driving a Mommy van used primarily to haul around Cub Scouts and baseball teams; the two-seat cutie would not have worked even if I could have afforded it.

A lot of people did though, as Guinness World Records proclaims the MX-5 as the best selling two-seat roadster in the world. The Club trim is new for 2013, replacing the touring trim from previous models and making it more affordable.

“The MX-5 Miata has been a global success and an enthusiast’s favorite from the get-go,” said Jim O’Sullivan, president and CEO of Mazda North American Operations (MNAO). “The continued passion for the MX-5 is a testament to Mazda’s dedication to producing a true driver’s car, and we look forward to sharing its next milestone with its ever-growing loyal fan base.”

For Club models, distinctive exterior characteristics include dark gunmetal alloy wheels, and black-colored details such as outside mirrors, head lamp bezels, and rooftop. A front air dam and rear diffuser are now included as well as the seat back bar garnish now displayed in a glossy dark gray motif. For Club models with a six-speed manual transmission, the Suspension Package also is included, with specialized exterior “Club” graphics and badges rounding out the finishing touch to fashion an attractively bold MX-5 look.

The soft top is simple and easy to use. With a central latch handle, the top requires only an effortless hand motion to fold and stow it behind the seats. The top itself descends into a cleverly designed storage well that provides 5.3 cubic feet of cargo space.