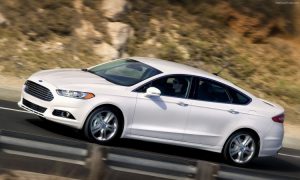 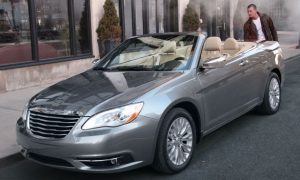 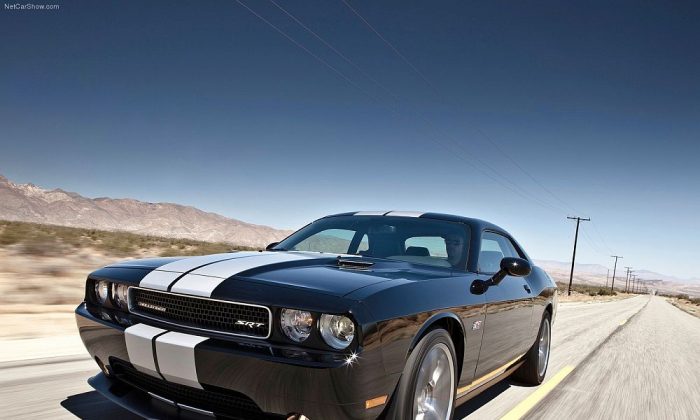 Infuse the cool retro look of the Dodge Challenger with a massive 6.4-L Hemi V-8 and you have the benchmark for a modern-day muscle car. The 2013 Challenger SRT8 is a thrill to drive, an attention-getting conversation piece, and a surprisingly comfortable commuter car.

It’s been five years since the revived Challenger hit the streets, and it’s still over the top in attracting attention, especially when bystanders hear the rumble of the 470-horsepower SRT V-8 that is capable of rocketing the two-ton coupe from 0 to 60 in around 4.5 seconds when equipped with the standard six-speed manual transmission.

During our week with the tire-smoking all-American machines (we had both the SRT8 and R/T Plus) we came to appreciate the attention to detail and understood how the car bubbles with nostalgia for Baby Boomers. For muscle car lovers the Challenger-particularly outfitted with one of two available V-8 engines-gives them a choice for a modern version of a classic.

When the Challenger and the Chevrolet Camaro debuted in their new clothes, the “pony car” war was back in full swing, bringing joy to that select group who line up for a chance to relive the past. Together with the iconic Ford Mustang, younger people can get a big taste of what so stirred their parents.

The Challenger in the high-performance guise of the SRT8 is a big car stretching out nearly 200 inches and weighing in at about 4,100 pounds. The big feel is not off-putting and it yields benefits such as a very usable 16-cubic-foot trunk.

Road carving is delightful in SRT8, and R/T trim levels and smoking-tire starts are a given with either edition of the Hemi V-8 under the hood. When someone asks, “…that got a Hemi?” chances are you can sum it up with “darn right!”

For those practical people who value a dose of performance along with a lower monthly insurance bill, the base SXT, powered by Chrysler’s award-winning 3.6-L Pentastar V-6 making 305 horsepower and 268 pound-feet of torque, fits the bill. It starts at $26,790 well-equipped offering near decent gas mileage and a 0-to-60 time of 6.3 seconds.

Whether the extra 94 horses is worth the $13,780 price difference is up to you, but we can report that driving the SRT8 with the standard six-speed manual transmission provided a thrilling week in which we managed to avoid a traffic ticket. The R/T was exceptional but with practice you could tell the difference. There’s also a rather outdated five-speed automatic available on either car but if you are going to opt for a Hemi we recommend the manual.

Not only does Challenger go extremely fast, it possesses great gobs of cornering ability, making a weekend drive on a rural winding back road a treat. Braking is also outstanding, measured at an extremely short 106 feet from 60 to 0. And what makes the Challenger even more alluring is its smooth and compliant ride.

There are some downsides to the Challenger, as there are with other cars in this class. The biggest of which is rear visibility. Because of the giant blind spots a backup camera would help reduce the anxiety, but it’s not available in the Challenger.

And Challenger reminds us of the days when American coupes were big, but with limited rear-seat space. To be fair, two adults can ride in back for short jaunts, but with limited leg room. Entry and exit proved difficult because the front seat does not move far enough forward and the front-seat shoulder belt serves as a blocking mechanism.

Inside, the dashboard layout is straightforward but a bit bland. The big seats are comfortable and will accommodate big bodies. Our test cars came with the optional navigation system. We think that for the high price of admission, navigation should be standard. For entertainment the SRT8 came with an upscale 18-speaker Harman Kardon sound system.

Although it has been an also-ran in sales against the Camaro and Mustang, we think that Dodge got the Challenger look and performance just right, offering a head-turning retro style, a comfortable driving experience, and the rewarding choice of two outstanding Hemi engines.