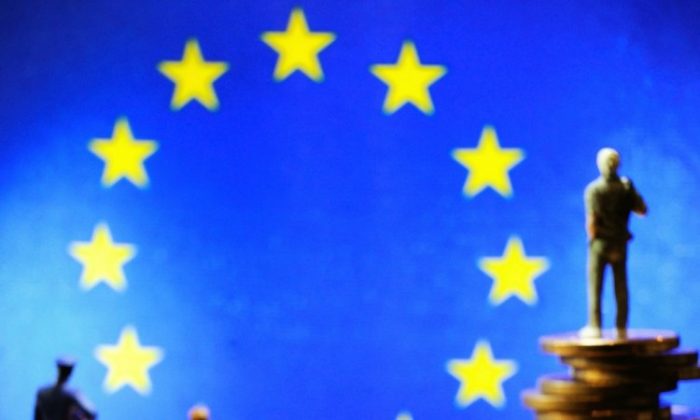 Employees walk past a logo of the Swiss banking giant UBS on Oct. 30 in Zurich. UBS announced more than 10,000 job cuts worldwide, drastically scaling down its investment banking business. In addition, UBS will be fined more than $1 billion for its role in the LIBOR-rigging scandal affecting numerous global banks. (Fabrice Coffrini/AFP/Getty Images)
Business & Economy

In Europe, the inevitable happened not once, but twice.

Greece’s default on its sovereign debt in March, at $231 billion, was the biggest of its kind in history. Private holders of Greek debt, mostly banks, were forced to take a write down (haircut) of as much as 75 percent. This was only a short respite, however. The country had two elections over the summer, pushing it to the brink of exiting the eurozone, as the public grew more discontent with austerity measures.

The economy worsened, unemployment reached 25.4 percent, and Greece’s GDP has been dropping at a rate of 7 percent. So the sovereign defaulted again in November, although the restructuring was smaller this time. Meanwhile, politicians across the globe kept throwing good money after bad, with total bailout sums reaching $527 billion, stretched over many years.

Greece wasn’t the only concern that kept central bankers and politicians busy in 2012. Worries about Spain and Italy and their banking sectors prompted the European Central Bank (ECB) to pump $1.3 trillion into the banking system via Long Term Refinancing Operations (LTRO). As Spain’s banking system neared collapse over the summer, the ECB went all-in and promised unlimited money printing. The unlimited buying of short-term government bonds would only be activated if a country agreed to close budgetary supervision by the European Union. So far no country has used the facility; the mere announcement was enough to push bond yields—and borrowing costs—lower.

The only clear recognizable pattern is this: Germany is only willing to provide assistance to the periphery with strings attached. Berlin has been pushing for more European integration and the forfeiture of budgetary sovereignty, putting all the power in the hands of bureaucrats in Brussels. The peripheral nations on the other hand would like aid without conditions. This tussle will be continued in 2013.

In this year of rather mixed economic performance, the real estate sector is a quiet winner. National housing prices, housing starts, sales volumes, and building permit applications have all risen over the course of 2012. Still at levels far below their 2007 peaks, the bounce in these indicators was a boon for real estate stocks, which outperformed most other sectors.

From Jan. 1 to Dec. 15, the Dow Jones U.S. Real Estate Index was up 11.8 percent. This trend outpaces the broader market gains of the Dow Jones blue chips (up 7.5 percent) during the same period. The latest data from real estate research firm CoreLogic estimates that U.S. housing prices posted a 6.3 percent gain over last year.

Experts expect the trend to continue into 2013. JP Morgan analysts expect a base-case increase of 3.4 percent in home prices in 2013, and a whopping 9.7 percent gain in its best-case scenario. Mortgage finance company Freddie Mac is slightly more conservative, but still projects 2 to 3 percent gains next year.

Thanks to the Federal Reserve, which buys $40 billion in mortgage-backed securities per month, mortgage yields are at record lows. It is much cheaper to buy real estate now than in 2007, and buying to rent has become a profitable investment option. Real estate is not as volatile as stocks, provides a higher yield than bonds, and offers some inflation protection. In order for the housing recovery to continue, however, the economy—and jobs—needs to grow faster.

In 2012, consumers have become more wireless. Mobile devices are faster and more user-friendly. There are apps for anything and everything, and national carriers are in fierce competition to provide faster, easier, and cheaper service.

All of the major carriers have announced billions in capital expenditures to improve their networks. AT&T plans to install 45,000 smaller cell sites to improve coverage in New York City, including inside buildings. In order to keep up with its bigger rivals, T-Mobile USA has announced its intention to merge with Metro PCS.

With respect to usage, the nation’s two biggest carriers—Verizon Wireless and AT&T—have moved to a tiered data usage structure with unlimited talk and text. T-Mobile and Sprint still offer unlimited data usage, but increased data usage may pressure them into adopting the same strategy.

In terms of hardware, tablet sales are registering their highest growth figures yet in 2012, with over 120 million units sold worldwide, up almost 100 percent compared to 2011. The reason? New apps with increased security have opened the market for enterprise customers. Consumers are not far behind either in setting new trends in usage. More consumers used tablets and smartphones than ever before to shop during Black Friday weekend.

A Year to Forget For Global Banks

Mega banks had a tough time in 2012. In a bid to control banking risk, regulators have stepped up the pace and introduced new rules for the industry. However, as of December 2012, most of them still fall short of being fully implemented.

One element of the Dodd-Frank Wall Street reform, dubbed the “Volcker Rule,” puts a ban on speculative proprietary trading by banks. The rule went into effect in July. But like many other restrictions on banks taking excessive risks, its effect remains to be seen, as regulators and the Federal Reserve have said that they are not ready to enforce the rule yet. In Europe, under the Basel III accord, banks would be fined for undercapitalization. European banks, however, remain undercapitalized and will likely not meet their original target deadline of 2013.

JP Morgan demonstrated that banks sometimes cannot control the risks they take. The bank, through one of its units, took positions in derivative contracts on $100 billion of underlying assets, mostly bonds. The bets placed by Bruno Iksil, head of JP Morgan’s Chief Investment Office, went sour as the situation in Europe deteriorated. Losses (estimated between $2 billion–$9 billion) became so large they had to be disclosed and the bank’s CEO Jamie Dimon was called to testify before Congress.

One area that U.S. regulators were especially tough on in 2012 was fines. British bank HSBC paid $1.9 billion to settle a money-laundering case. Switzerland’s UBS in late December agreed to pay $1.5 billion to settle an interest-rate-rigging case dubbed “LIBOR-Gate.”

The LIBOR is a composite rate that seeks to measure the interest that banks charge each other in overnight loans, and is used as a basis to determine rates on a wide variety of consumer and business loan products. British investigators accumulated extensive evidence that this rate-setting process was rigged. Banks colluded to set rates to benefit their trading books, instead of a competitive bidding process. British bank Barclays was at the epicenter of the scandal, with many internal emails serving as evidence. As a consequence, CEO Bob Diamond resigned and the bank was fined $451 million.

With the exception of Goldman Sachs, many banks reported lackluster earnings. Regulatory pressure, fines, and a tough market environment prompted banks to announce major layoffs to cut costs and boost earnings. Citigroup and UBS were at the head of the pack, laying off 11,000 and 10,000 workers, respectively. Many analysts expect the cost-cutting trend to continue in 2013.

GDP Growth Stable
GDP growth was stable for the year. In what economists call “stall speed,” the economy continued to expand at below trend growth. It added 1.5 percent to GDP over the first nine months of 2012.

Fiscal Cliff Threatens Economy
The fiscal cliff debate dominated headlines again at the end of 2012. If congress does not reach an agreement in early January 2013, the budget will be cut by $667 billion, or 4.3 percent of GDP. This will most likely push the economy back into a recession.

AIG Set Free
The Treasury sold the last portion of shares it held in AIG—worth $69.8 billion—in late 2012. The total profit was $5 billion or 7.2 percent.

A Supercharged Black Friday Weekend
Retailers opened even earlier this year on Black Friday, with many introducing deals as early as Thanksgiving evening. Turnout and average spending both increased for the whole weekend as consumers shopped for bargains.

Sandy Hurts Eastern US Businesses
Hurricane Sandy wreaked havoc at the end of October, damaging wide areas of New York, New Jersey, and Connecticut. Based on requests for aid by the states, the Congressional Budget Office estimates total damages to be $60.4 billion.

Facebook IPO Disappoints
The public awaited the $104 billion IPO of Facebook Inc. with much anticipation. But after trading up for one day, its stock continued to slide until the end of the year. Investors that bought at the IPO price of $38 lost 28 percent through Dec. 14.

Apple Sets Valuation Record
Apple Inc. set a new record for the most valuable nongovernmental company in history. It first surpassed Microsoft’s 1999 record of $621 billion on Aug. 20 this year. If one factors in inflation, Microsoft would have cost $850 billion in 2012 dollars, so Apple’s record is in name only.

US Automakers Downsize in Europe
American carmakers are scaling back manufacturing in Europe. With the continent in recession, U.S. automakers GM and Ford are trying to cut their losses from European operations. Ford is laying off 8,000 staff, and closing three plants. GM’s Opel unit is in the process of shutting down a core plant in Bochum, Germany.

Sharp Teeters on Edge of Bankruptcy
Japanese electronics giant Sharp is on the verge of bankruptcy. The maker of consumer electronics reported a loss of $4.8 billion for the first half of its 2012 fiscal year and says it only has enough cash to survive until June 2013.