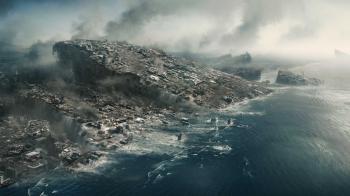 By James Carroll
Print
No one does sentimental and spectacular quite like Roland Emmerich, as Independence Day and The Day After Tomorrow prove. 2012 rounds off this disaster trilogy in stunning fashion.

Act One: The patient build-up as we learn the “science” behind the spectacle and discover the main players in the melodrama.
Act Two: Death, destruction and mayhem as doomsday arrives and the world shifts, collapses and implodes around us (by far the best bit).
Act Three: The mad dash to safety as our intrepid heroes learn of the government’s species-saving plan and attempt to outrun the global devastation to see the next dawn of the earth (this has happened before and will happen again …).

These machinations don’t matter though. They’re just the backdrop for two-and-a-half hours of unashamedly stupid, suspenseful and stupendous fun. Yes it’s overlong by at least 20 minutes, with the Prison Break into the “Ark” an improbable set-piece too far, and the subsequent Poseidon rip-off scenes even more superfluous. But by that time you’re with these amiable people every step of the way and crossing all your body parts that they make their escape ahead of the killer tide.

The undoubted highlight of Emmerich’s effects-fest arrives about an hour in. Cusack’s Curtis stuffs his family into a stretch limo and dodges all the emerging earthquake cracks, tumbling buildings and exploding fireballs in a frenetic escape from a crumbling L.A. Come the transfer to a light aircraft and the final burst into open air (no that isn’t a spoiler) you can finally release that breath you’ve been holding for 15 minutes to holler your relief and excitement for the spectacle you’ve been privy to. This is what effects films are for, and this is exactly why you go to see this category of film.

A modern classic disaster flick to rate alongside masterpieces like Earthquake, The Towering Inferno and When Worlds Collide, 2012 cements Emmerich’s place as the number one master of disaster. So find the biggest screen you can to see this on, hold onto your hat, be open to the implausible and enjoy what is a dazzlingly daft thrill ride.