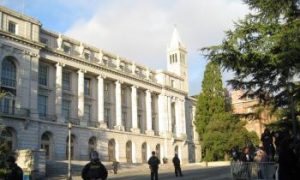 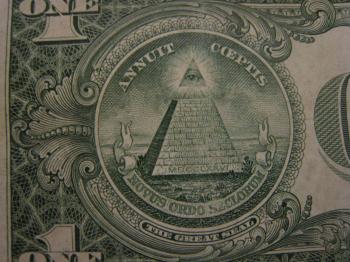 The Great Seal of the United States, printed on the American dollar bill, has a 13-level pyramid. (Stephanie Lam/The Epoch Times)
Beyond Science

“We call it a butterfly diagram, because sunspots make a pattern in this plot that looks like the wings of a butterfly,” said Dr. David Hathaway of the Marshall Space Flight Center in a NASA article about the effects that solar dynamics could have on Earth’s magnetism. Because of all the twists and turns, “the impact of the field reversal on the heliosphere is complicated,” he said.

Like Hathaway, dozens of scientists around the world are wondering how high the magnetic hostility from our “parent star”—the sun—will be in 2012, which we know will be in one of its major cycles of solar activity. According to projections, the expected rotation of the sun’s magnetic polarity acts as a sort of colossal cosmic magnet capable of altering the magnetic fields of all bodies within its heliosphere, in which our planet Earth is embedded.

Although the Mayans disappeared a long time ago, their calendar—called the Long Count Calendar—has managed to survive until today. According to the calendar, the end of the current human civilization will be the last day of the 13th Baktun, which in our calendar corresponds to December 21, 2012.

Some believe that the Great Seal of the United States describes this prophecy. The reverse (or back) of the seal has a 13-level pyramid. At the peak of the pyramid, there is a bright eye. (The initial design had a palm tree.) It is thought that this symbol implies the awakening of human beings after the 13th Baktun.

In 2007, Dr. H. Jay Zwally, a project scientist on NASA’s ICESat mission, estimated that all the ice in the Arctic Ocean will be melted by 2012.

Others like Dr. Habibullo Abdussamatov of the Pulkovo Astronomical Observatory in Russia claim that in 2012, sunspots will bring the beginning of a small ice age that will last until the middle of the next century.

Also, some believe that the end of the world will come with the collision of Earth and a planet called Nibiru. However, the existence of this celestial body is closer to Sumerian myth than a product of astronomical observation.

What the Mayans had managed to discover—2,000 years before computers were able to—is that December 21, 2012, corresponds to the end of Earth’s precession rotation, which is a cycle nearly 26,000 years long. During the 2012 winter solstice, the sun will be positioned exactly at the Dark Rift of the Milky Way Galaxy, or what can be considered the galaxy “sitting” above Earth. Some astronomers define this galactic alignment as being like the opening of a door to heaven for Earth.

Truth or myth, the prophecies about 2012 never cease to be a good opportunity to reflect on the fate of humankind, our role as humans, and our role as sentient beings in the midst of an immense cosmos.

Vanessa Rios contributed to this article.