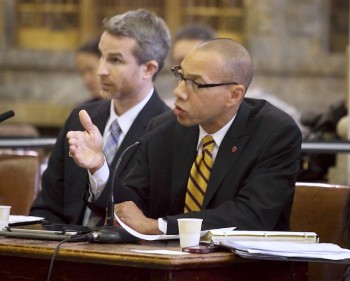 Dennis Walcott, former NYC deputy mayor for education, was appointed New York City schools’ chancellor in April, following a short tenure by Cathleen P. Black. Walcott and his two predecessors, Black and Joel I. Klein, were all issued waivers enabling them to serve without meeting the professional requirements for the position.

Under Walcott, the city averted 4,100 teacher layoffs, but still had to lay off 672 other education employees in its fifth consecutive year of budget cuts in 2011. Walcott, who holds a master’s degree in education, has spent a lot of his time improving relationships between the administration and its constituents.

Manhattan Borough President Scott Stringer issued a scathing report of the Community Education Councils, calling them “a citywide embarrassment.” Ballot errors, general confusion, and mysterious run-off elections were found in the education council’s 2010 elections— 98 percent of respondents to a survey conducted for the report said they thought the election process could be improved.

Twenty arrests for SAT cheating scandals rocked the system this year. In Nassau County, 7 arrests in September and 13 in November put the DA’s office and the nonprofit that administers the test on alert. The DA’s investigation is ongoing.

A report card released in November by the National Assessment of Educational Progress showed fourth- and eighth-graders in the city significantly increase math and reading scores from 2003 to 2009, after which they stabilized or declined.

The city will use $15 million to purchase nonfiction books for middle schools to address reading scores. It also plans to open at least 50 new middle schools, “while phasing out those that continue to fail their students,” according to a press release,  while after-school programs have suffered budget cuts.