Hat Designer: A 'blaze of color out of this world'
0 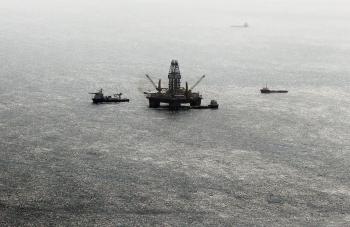 RETROSPECTIVE: Oil sheen is seen with vessels assisting near the source of the BP Deepwater Horizon oil spill on July 23, 2010 in the Gulf of Mexico. For years to come, 2010 will be known as the year of the Gulf oil spill, an environmental and economic disaster impacting almost every industry. (Mario Tama/Getty Images)
Business

By Heide B. Malhotra
Print
WASHINGTON—At the end of 2010, two years after the world suffered one of its worst financial meltdowns, many of America’s media, government agencies, economists, think tanks, and academics have become cautious in predicting the future.

“I forecast sluggish growth for four quarters, then a small pickup,” predicted economist Dr. Bill Conerly. “I think there’s the potential for a stronger pickup late in 2011, but the Fed would have to get working on that this month,” he wrote on Seeking Alpha, a financial website.

Unemployment in December still hovered around 9.4 percent, according to a January announcement by the U.S. Bureau of Labor Statistics (BLS).

Grounds for slight optimism came from an uptick in consumer spending in October and November of last year. However, companies have not stopped retrenching employees, mostly due to closing divisions and cutting down operations, with 152,816 workers losing their jobs through mass layoffs in November, according to the latest BLS report.

On the positive side, U.S. exports increased by $4.9 billion in October over September, and imports decreased by $0.9 billion during the same month, according to the latest BLS announcements, putting a slight dent in the U.S. trade deficit.

One more positive sign is that U.S. Bureau of Economic Analysis publications indicate that the U.S. business sector is making inventory investments and increasing their equipment and software purchases.

“Information received since the Federal Open Market Committee met in November confirms that the economic recovery is continuing, though at a rate that has been insufficient to bring down unemployment,” according to a December statement from the Federal Reserve.

For years to come, 2010 will be known as the year when the Deepwater Horizon oil spill dominated the airwaves for three months.

Tourism on the coasts of Mississippi, Alabama, and Florida halted to a standstill and the economy fell on its face, leaving tens of thousands without jobs in the region.

Commercial fishermen were affected, and many restaurants that primarily served products from that area had to close down. The domino effect was felt in almost every industry, from manufacturing to the service industries, throughout the entire United States.

“The economic impact of this disaster is going to be substantial and it is going to be ongoing,” said President Obama in a published discussion with cabinet members in June of 2010.

Next: Leading economic indicators, such as the ones we used that failed to warn us about an impending economic disaster back in 2007, have become unpredictable.