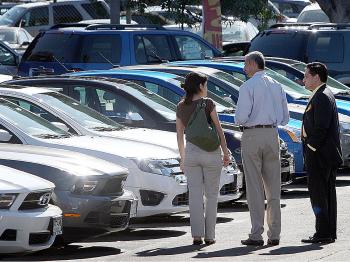 Antonio Perez
View profile
Follow
biggersmaller
Print
NEW YORK—Auto sales are expected to rebound this year, despite the recent woes suffered by one of the country’s best-selling brands, experts say.

A recent survey by Jumpstart Automotive Group found that 80 percent of prospective car buyers said that they would target buying a Ford, Chrysler, or General Motors vehicle instead of Toyota, due to recent negative publicity related to Toyota’s quality. But more than 33 percent said that they may yet consider a Toyota if they delay their purchase and let the recalls play out.

Despite Toyota’s woes, the industry as a whole should rebound this year.

An analysis by Jack Sayer at the Gerson Lehrman Group said that U.S. sales of cars and light trucks will rise by 14 percent this year to 11.9 million units sold. And sales would be even higher in 2011 due to availability of credit.

“For car buyers, four words mean the difference between going home in a new ride or their old clunker. ‘Your loan has been approved,’” said Sayer. “With consumer confidence on the rise and a slight drop in unemployment figures, auto sales could be on the way back.”

“It could take another year or even longer for lenders to trust consumers enough to return to normal levels for auto lending,” Sayer said. “It's also far from the freewheeling days of the credit boom. Third quarter auto lending was down 30 percent from the same period in 2008, a year when U.S. car and light truck sales hit 16.5 million.”

Dealerships Looking to the Future

Last year, 1,772 U.S. dealerships—mostly from GM and Chrysler—closed their doors as closing underperforming dealerships was a large portion of both automakers’ restructuring efforts.

The closures in 2009 may have been the biggest in history, according to the National Automobile Dealers Association (NADA). But despite the losses, NADA says that dealers should look toward a brighter future ahead.

“Last year, through much hard work, we avoided Armageddon for many in our industry,” NADA Chairman Ed Tonkin said in a statement. “Now we’re able to focus on some serious issues that face us this year.”

NADA had their annual convention in Orlando, Florida last weekend, and many Toyota dealership representatives were unhappy with the way Toyota had communicated to their dealers, many of which are dealing with a battered reputation and skyrocketing recall costs.

“I think it will come out why Toyota did not include the dealer partners in the discussions on how to approach this PR disaster,” Fritz Hitchcock, an owner of a Toyota dealer in the Los Angeles area, told the Automotive News.