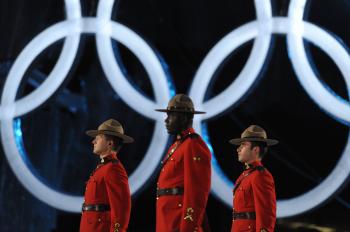 Mounties stand next to Olympic rings during the closing ceremony of the 2010 Winter Games in Vancouver. Violations of free expression during the Olympics was one of the topics covered in a new report by Canadian Journalists for Free Expression. (Dimitar Dilkoff/AFP/Getty Images)
US

By Joan Delaney
Print
The health of free expression in Canada—or the lack thereof—was the subject of a report released by a Toronto-based watchdog organization Monday to coincide with World Press Freedom Day.

In its first-ever annual report, Canadian Journalists for Free Expression (CJFE) analyzed a range of issues, including the reasons human rights tribunals should stay away from trying to regulate offensive speech, police impersonation of journalists, and violations of free expression during the 2010 Olympics.

From unprecedented rulings by the Supreme Court of Canada, to stonewalling by the federal government on access to information requests, the report found that 2009 was a noteworthy year for free expression issues in Canada.

“There are big changes happening in Canada right now. That was one of the reasons we chose this year to create this report card, because it’s been a remarkable year,” says CJFE manager Julie Payne.

“There have been eight groundbreaking cases in front of the supreme court—some of them we’re still waiting for decisions, some of them we’ve been getting decisions—and they’re really going to change the landscape for free expression.”

The report gave the government a failing grade on access to information, pointing out that although Prime Minister Stephen Harper made eight promises during the 2006 election campaign to reform Canada’s access to information laws, just one has so far been kept—and that only partially.

Forty-three percent of information requests to government departments were not met within the required time limit of 30 days; 23 percent took more than 60 days. When they were finally released, some documents had large chunks of text blacked out.

Payne says that while successive governments have stonewalled on access to information requests, the problem is “reaching a crisis point now.”

Cases currently before the Supreme Court promise to make 2010 another noteworthy year for free expression, she says.

“There’s two big ones about protection of sources issues that we’re still waiting for decisions on. There are all sorts of things happening in terms of access to information and the government and what Canadians have a right to hear and know. It’s an exciting time. I think there is some really groundbreaking work happening and hopefully it will have an impact.”

The following are some highlights of CJFE’s 2009 Free Expression Review.

Free expression in the courts: Defamation rulings and hate speech laws became the subjects of high-profile court cases in 2009, with journalists and writers on one side and citizens and minority groups aggrieved by their reporting on the other, said the report.

In December 2009, a landmark ruling by the Supreme Court established the defence of “responsible communications,” allowing journalists who cover stories “on a matter of public interest” to escape liability if they can show they diligently attempted to prove the facts.

On the issue of more openness in court, at the appeals court level, all the cases CJFE reviewed were decided in favour of more open courtrooms. However, at the trial level, it was a different story.

“While there are trial judges who are informed and sensitive to the concept of transparency, far too often the lower courts exhibit a stubborn dependence on a knee-jerk use of publication bans, sealing orders, and in-camera proceedings,” the report said.

Freedom of information: The report found that Canada’s Access to Information Act (ATIA) has largely been used to hide rather than provide information, with the situation worsening in recent years.

During 2009, the worst offenders for stalling on information requests were Health Canada, Public Works, the RCMP, Canada Border Services, Foreign Affairs, and the Department of National Defence.

Introduced in 1982, the ATIA circumscribed what information was available by excluding all cabinet documents and dozens of government agencies and Crown corporations. It also declared that the Information Commissioner could not be compelled to release information that the government decided should be kept secret.

The report explained that “free” means “unfettered” while “access” means “an approach,” with the result that the ATIA guaranteed a procedure rather than a right. CJFE is calling on the government to close this loophole by making it a freedom of information act rather than an Access to Information Act.

Police impersonating journalists: Canada is one of the few western democracies that allow police to pose as journalists, the report said. It cites cases in which police pretending to be reporters have arrested suspects after luring them into false interviews, posed as reporters to capture protests on film, and pretended to conduct news interviews to gather information for their investigations.

Supported by other media and free expression groups, CJFE is preparing a court application against the Ontario government to end the practice of police impersonating reporters. The application seeks a declaration from the court that the practice violates the freedom of expression guaranteed in the Canadian Charter of Rights and Freedoms.

Olympic watch: In monitoring the 2010 Olympics in Vancouver in January, CJFE found that officials at all levels of government “appeared all too ready to deny speech, protest and assembly rights in order to generate a rosy glow on the Games.” Most worrisome, said the report, was the temporary detention and interrogation of four American journalists and their colleagues travelling to Canada around the time of the Olympics.

Other areas covered in the report include free speech on the Web, attacks on the ethnic press and the unsolved murder of Indo-Canadian Times founder Tara Singh Hayer, and Canadian journalists attacked or detained abroad.

CJFE also recognized several accomplishments during 2009, including the Information Commissioner of Canada “for keeping the government’s feet to the fire in difficult circumstances,” and major media outlets that, in a year of recession, spent tens of thousands of dollars arguing important cases in all levels of court.