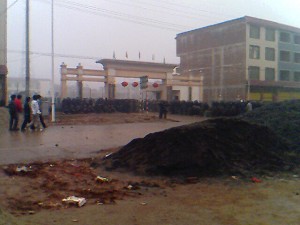 On March 9, a large protest involving farmers from China's Hunan Province broke into a riot. The problem began as the Anda Bus Company doubled ticket prices during the Chinese New Year—an important Chinese holiday where people throughout the country travel to see friends and relatives.

Local farmers demonstrated outside the bus company to protest the price increase but their voices went unheard. A conflict arose and the demonstration soon turned into a riot.

For two days, locals burned more than ten police vehicles and more than a dozen civilians were wounded. One student was sent to a local hospital and later died from injuries caused by the melee. The conflict continued to spread throughout the area.

During the Chinese New Year holiday, the Anda Bus Company, the region's only bus line, strategically doubled the price of bus fare from six yuan to between 10 and 15 yuan for a trip from Zhushan to neighboring Lingling. This sudden and substantial increase in bus fare targeting the busy travel holiday resulted in a large gathering outside the terminal as demonstrators demanded a fair price.

In retaliation, the bus company president threatened to remove all buses from the region, sparking even greater anger among protesters.

On Saturday, March 10, the Anda president brought in several dozen men to dissipate protesters, leading to further aggravation among demonstrators. That afternoon, nearly 10,000 people were protesting outside the bus station.

“I will spend 20 million yuan to have the entire town brought down!” the Anda president warned the enraged and growing swarm of protesters. Instead of intimidating the protestors, the comment drove the angry crowd to burn down a bus parked outside the station as the situation grew worse.

Later, the local fire department hurried to the scene to extinguish the flaming bus. That night, the Lingling District government mobilized nearly 100 riot police to Zhushan. The next morning, over 20,000 protesters gathered outside the bus station as riot police tried to control the angry mob. Zhushan Police Chief and Deputy Chief of the Lingling District Public Security Bureau, Liao Jinsong, ordered his men to arrest the protesters, inciting brutal battles between officers and demonstrators.

The angry protesters began throwing bricks and rocks at police station windows as officers beat the protesters with one meter-long steel nightsticks. The melee resulted in dozens of civilian injuries, including four wounded students. One of the students suffered a broken leg and later died on his way to the hospital.

Some individuals made calls to CCTV's “Focus Interview” program, The Hunan Daily Newspaper , Hunan Economics TV Station, Hunan Satellite TV and other local media, but no one was willing to cover the riot. They all feared that reporting the riot would have a negative impact on viewers.

By noon on Tuesday, March 12, the officers had the situation under control. According to the Lingling District government broadcast, authorities demanded that protesters stop the conflict and blamed them for causing the riot.

Mr. Zhang Zilin from mainland China's Pan-Blue Coalition (a party known to favor a nationalist identity) said, “There was a huge conflict between protesters and armed police in front of the new Zhushan government building. Over 1,700 local officers, riot police and special armed forces were policing the scene. Officers even attacked passersby and destroyed their motorcycles. During the conflict, four police vehicles were burned and city management vehicles were destroyed. The police initiated the attack and chased off protesters.”

By Tuesday evening 20 military vehicles had arrived at the battleground carrying M.P.'s, soldiers and other military personnel. A large group of armed police was busy making arrests.