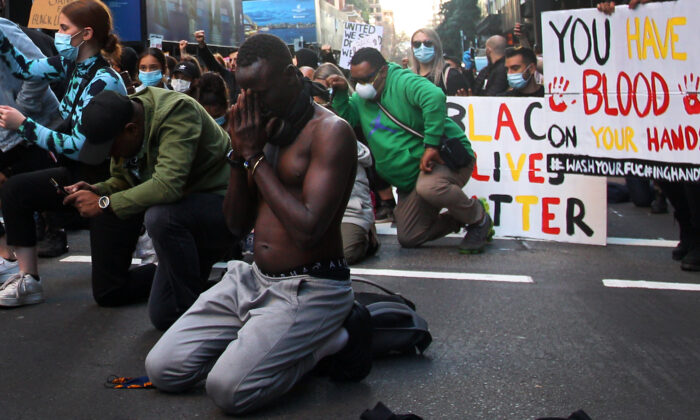 Only three people were arrested during a mostly peaceful rally on Saturday as twenty thousand people filled the streets of central Sydney to protest against death of Aboriginal people in police custody.

Pleas from the prime minister and New South Wales government against risking the potential spread of the Wuhan coronavirus, or CCP virus, did not stop tens of thousands of people joining the rally on June 6, which was authorised at the eleventh-hour by the state’s Court of Appeal.

Protests were sparked by the death of black American George Floyd, who died on May 25 while being arrested by police in Minnesota.

The event called for an end to black deaths in custody in Australia.

The mother of 26-year-old David Dungay, who died at Long Bay jail hospital in November 2015, was one of the guest speakers.

The family alleged that justice has yet to be served in Dungay’s case after the coroner found that the conduct of the five guards and a nurse, Charles Xu, involved in restraining Dungay before his death was “not motivated by malicious intent” but “limited by systemic efficiencies in training,” which need to be addressed. Dungay also suffered from diabetes and schizophrenia.

The coroner recommended that the Board of Nursing review Xu’s administration of the sedative.

Dungay’s final words mirrored those of Floyd: “I can’t breathe.”

NSW Police charged two people at Town Hall Railway station on their way to the rally, according to a police statement. Two men, aged 15 and 23, were allegedly involved in a physical altercation with police, resulting in the eldest being tasered and arrested. He was later charged with affray. The 15-year-old was charged with a youth caution.

Around 6 p.m. as police attempted to move people through the station after the rally, some people allegedly became aggressive, with a 21-year-old man accused of becoming violent. Officers from the riot squad attempted to remove him and a struggle broke out, NSW Police said in a statement on June 7.

The 21-year-old Mount Druitt man was arrested and charged with offensive behavior and resisting police.

Police are investigating the incident where five people needed treatment from pepper spray. In the same clash, a police officer was struck in the face and is also receiving treatment.

“The officer is being treated, he has a sore face today … police are not punching bags and don’t deserve this to happen,” Lanyon said.

At the press conference, a reporter pointed out that some hatred and foul language were directed at police.

“… It’s worth understanding that at any of these types of protests there will be groups of people who seek to pursue interests that are contrary to the rest of the protest group,” Lanyon responded.

“It’s incredibly disappointing people that would hold that position.”

Lanyon says he certainly believes that there are people who attend protests with an interest to incite police and try to cause violence.

Despite a few incidents, Assistant Commissioner Mick Willing said in a statement on June 7 that his commanders reported that the protests were “essentially peaceful.”

“Some 20,000 protesters turned out in Sydney today, and to only have three arrested is a really positive result,” Assistant Commissioner Willing said.

At 4:32 p.m., demonstrators knelt en masse in Sydney’s Belmore Park and held up their fists. They were acknowledging the 432 Aboriginal people who have died in police custody since 1991—an average of 15 deaths each year.

The NSW government applied to the Supreme Court to ban the protest, and the court ruled on June 5 in the government’s favour. But the appeals court overturned the decision, authorizing the public assembly just 15 minutes before the 3 p.m. start time on June 6.

Liberal Party MP Jason Faliniski has been critical of the authorisation to allow the protest to go ahead, saying on Twitter, “Before you can have equality, you must have equality before the law. You can’t apply health orders to weddings, funerals, and ANZAC Day, but not to protests. Otherwise, you can’t have equality.”