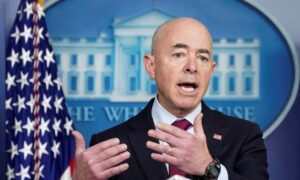 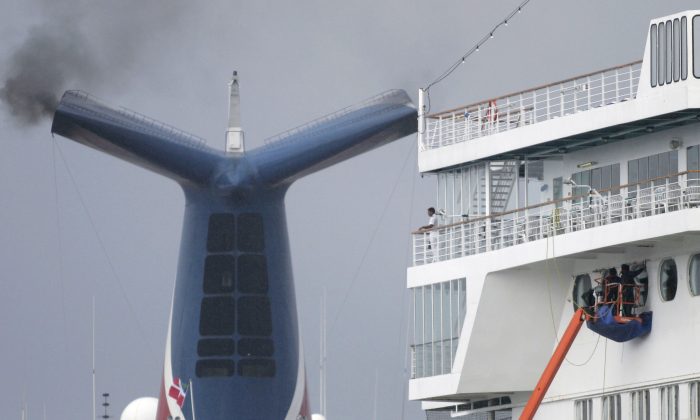 Workmen make repairs to a Carnival cruise ship in the Port of Galveston, Texas. (Photo by Dave Einsel/Getty Images)
US

Four cruise ships were trapped at sea near Texas. Torrential rains and flooding from Hurricane Harvey prevented the ships from reaching their Texas port destinations. The four ships carried 20,000 passengers.

The U.S. Coast Guard closed ports along the coast of Texas including those in Houston, Galveston, Texas City, Freeport, and Corpus Christi because of the hurricane. One of the ships was rerouted to Miami. Royal Caribbean anticipates the 4,451 people on board Liberty of the Seas will reach Galveston, Texas by Sept. 1, once flooding subsides. Royal Caribbean canceled the next sailing of Liberty of the Seas that was planned for Aug. 27.

“We are doing all we can to help guests adjust their travel arrangements and appreciate their patience during a stressful time,” said Owen Torres, manager of communications with Royal Caribbean Cruises, via a Fox News report.

Officials would prefer if ships cannot access ports at this time. They are worried ships planning to make port at Galveston will leave thousands of passengers in a worse situation after they disembark. Passengers may not be able to safely get back home, or even get close to home while the state is still battling with Hurricane Harvey. Cars parked at cruise ship terminals are flooded in, Chron reported.

The Carnival Freedom and Carnival Valor, scheduled to dock Aug. 26, provided passengers with a choice of docking points as they make a preliminary stop in Louisiana. Carnival Cruise Line published a statement on the Port of Galveston Facebook page.

“Currently the Carnival Freedom and Carnival Valor are at sea and will remain a safe distance from the storm. Both ships will make a brief stop in New Orleans on Saturday to replenish fuel, fresh water, and food supplies. Guests who wish to terminate their cruise at that point and disembark in New Orleans may do so. However, given the severity and projected path of the storm along with potential challenges guests may encounter attempting to travel back to Galveston independently, we are strongly encouraging them to remain on board as we intend to return the ships to Galveston as soon as feasible.”

People who drove in to the port from Texas and other states to board cruises are not quite sure what they should do at the current time. Carnival Cruise Line’s Facebook page is full of people asking questions about planned cruises from Galveston.

In addition to passenger ships, commercial ships are stuck at sea. Ships carrying cars, grain vessels, and some bulk carriers are stranded. But “The four cruise ships – two of which were due today—those are everyone’s highest priority,” said interim port director Peter Simons.

Damage to the ports is constantly being assessed to avoid significant disruption. Port officials predicted that the Galveston port will need until Aug. 29 or 30 to open.