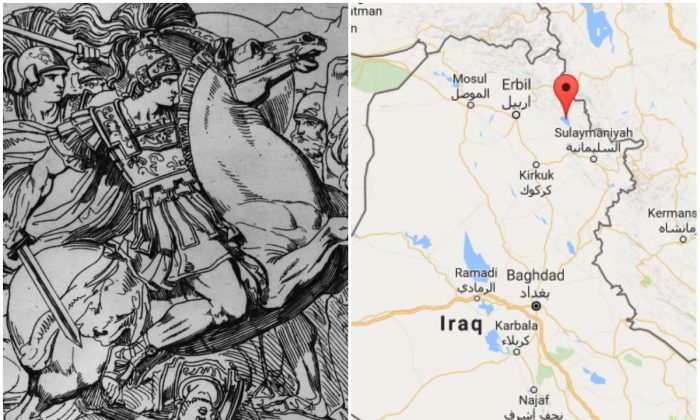 L: Circa 330 BC, Alexander the Great (356 - 323 BC) King of Macedonia, on his horse Bucephalus. (Hulton Archive/Getty Images); R: Approximate location of the ancient city at Qalatga Darband in Iraq. (Screenshot via Google Maps)
archaeology

An ancient city possibly founded by Alexander the Great has been discovered in Iraq thanks to the release of old spy photos and new drone footage.

The city, over 2,000 years old, was discovered by British Museum archaeologists. They stumbled upon it studying spy satellite photos taken over Iraq by the American government in the 1960’s. The images were declassified in 1996.

The archaeologists think the city was built on a route the Alexander of Macedon took in 331 BC while pursuing Persian King Darius III; who was fleeing from his defeat at the Battle of Gaugamela.

The city, nearby Lake Dukan in northeast Iraq, was circled by a wall and had a fort, a temple, and wine presses.

“It’s early days, but we think it would have been a bustling city on a road from Iraq to Iran. You can imagine people supplying wine to soldiers passing through,” said John MacGinnis, British Museum archaeologist, according to The Times.

The archaeologists were unable to organize a dig both during the Saddam Hussein era and during the Iraq war. They were only able to start field work last year thanks to sufficient security in the area and a program to train Iraqi archaeologists to recover relics ruined by ISIS terrorists.

In response to ISIS destroying cultural heritage sites in Iraq and Syria, the British Museum secured almost $4 million from the British government to train 50 staffers of the Iraqi State Board of Antiquities and Heritage “in a wide variety of sophisticated techniques of retrieval and rescue archaeology,” the museum stated on its website.

Part of the training was field work in Iraq, including a dig at Qalatga Darband scheduled to start in September 2016.

The Iraqis flew a camera-equipped drone over the site and then looked for patterns in the wheat and barley fields.

“The drone yielded excellent information,” said MacGinnis, lead archaeologist of the museum’s program. “We got coverage of all the site using the drone in the spring—analyzing crop marks hasn’t been done at all in Mesopotamian archaeology.

“Where there are walls underground the wheat and barley don’t grow so well, so there are color differences in the crop growth.”

They also conducted excavations and found terracotta roof tiles as well as the remains of two statues, one possibly of Persephone, the queen of the underworld, and the other of Adonis, another figure of Greek mythology thought to represent an ancient spirit of vegetation.

It is not clear if the city was actually founded by Alexander, or if it was just established roughly in the same historical period.L: Circa 330 BC, Alexander the Great (356 – 323 BC) King of Macedonia, on his horse Boucephalus. (Hulton Archive/Getty Images); R: Approximate location of the ancient city at Qalatga Darband in Iraq. (Screenshot via Google Maps)