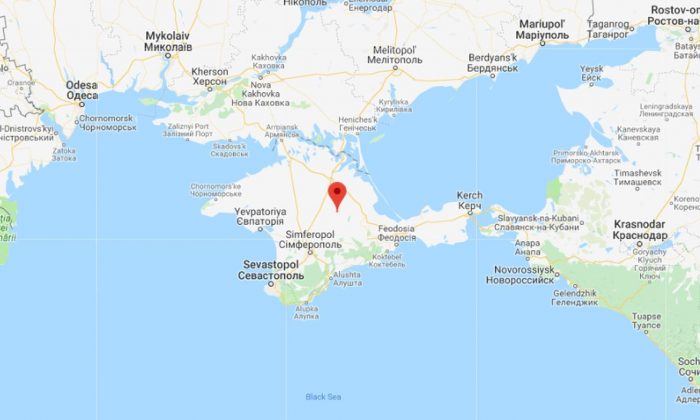 A 2,000-year-old skeleton of a toddler was discovered in the eastern part of the Crimean Peninsula, and researchers found that the boy had a cranial deformation.

Scientists from the Archaeology Fund, a group that organizes digs across Central Russia, Crimea, and Northern Africa, described the finding as an “alien’s grave” due to the skull’s unusual shape, Russian state-backed media reported this week. However, a Russian scientist denied it was an alien.

The group stated that the skull deformations were consistent for a tribe of the Sarmatians, who inhabited Crimea at one time.

The practice of deforming the skull was similarly popular at one time among tribes who emigrated from the Caucasus region such as the Huns, Sarmatians, Avars, and the Alans. At least 200 elongated skulls have been found in the Carpathian Basin so far.

The skeletal remains were located at a Sarmatian cemetery dating to the first to third centuries near Yakovenkovo. It was excavated before work at a giant bridge that would link the Crimean Peninsula and Russia.

Nikolay Sudarev, a scientist from the Archaeology Institute of Russian Academy of Sciences, said the grave doesn’t belong to an alien.

This has left archaeologists baffled.

“Elongated skulls were traditional for the Sarmatian culture,” he said, according to the Moskovsky Komsomolets newspaper, as reported by The Nation.

Of the skull-elongating process, “They thought this was more beautiful,” he said.

A vessel made of clay and tiny beads were discovered near the grave. The boy also had on a copper bracelet.

“The practice of intentional deformation of the skull was once widespread all over the world. According to current beliefs, this custom probably appeared independently in different regions of the world, beginning as early as the Late Paleolithic Period, but possibly even earlier,” says Ancient-Origins of the practice.

These elongated skulls stood out when they were first unearthed in the 1960s — now, new research is helping anthropologists understand their origins:

It prompted speculation that these women were “treaty brides” from Bulgaria and Romania, who were married off for political purposes. The remains date to about 500 AD.

“This is one of the strangest things I’ve ever read,” said Israel Hershkovitz, an anthropologist at Tel Aviv University in Israel. “I don’t buy it.”

Hershkovitz stated that he doesn’t dispute that they’re Bulgarian or Romanian, but he is skeptical that their skulls were artificially deformed.

He also said ancient tribes who intermarried usually only sent one or two individuals at a time. More than a dozen women in one generation would have been very unusual, Hershkovitz said.

What a crazy story!