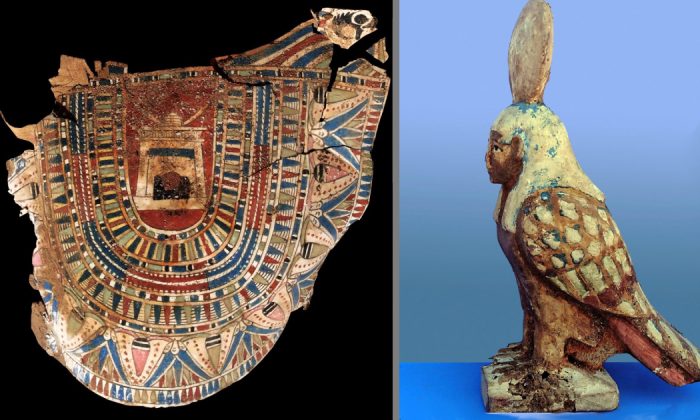 A painted and gilded cartonnage (L) and a Ba bird, which represents the soul of a deceased individual. (Ministry of Antiquities-Arab Republic of Egypt)
archaeology

Valuable artefacts and mummies that date back two millennia were uncovered in southern Egypt, authorities confirmed on April 23.

The Ministry of Antiquities-Arab Republic of Egypt confirmed an ancient tomb had been found carved in stone from the Greco-Roman period in Aswan, 539 miles south of Cairo, according to The Associated Press.

The Greco-Roman Period (332 B.C.-395 A.D.) saw the rise of Macedon King Alexander the Great in ancient Greece who conquered the Persians from present-day Iran who ruled over Egypt at the time, and founded Alexandria which is currently the second largest city in Egypt.

An Italian archaeology mission led by University of Milan professor Patrizia Piacentini made the discovery near the iconic mausoleum of Aga Khan III, Sir Sultan Muhammad Shah, who lobbied for religious rights in India and was buried near the site of his former winter-time villa two years after his death in 1957.

The tomb contained about 30 mummies, including young children who Piacentini thought were “superimposed” and could possibly include mothers and their children.

An intact stretcher was also discovered leaning against the north wall of the tomb, made of palm wood and joined with linen strips. The item was understood to be used to transport mummies into the tomb.

Archaeologists from Egypt and Italy have discovered at least 34 mummies in the southern Egyptian city of Aswan. #9Newshttps://t.co/OI5MIoxznp

“Many important archaeological artifacts dating back to the Greek-Roman era were also found, including a large collection of cartons made of cardboard with footprints stamped on the feet of the mummy, who wears sandals and embellishes his fingernails,” Piacentini said in a statement.

A couple of small Ba bird statues were also recovered which, according to ancient Egyptian mythology, was believed to fly out of the person’s tomb to join their vital essence in the afterlife.

“[There were] two small statues, one of which is a good preservation of the Ba bird, which represents the spirit of the deceased and shows all of his details in the decoration,” Piacentini said. “[There were also] two potsherds contain the bitumen used for embalming (brain removal for mummies).”

In addition to this, Supreme Council of Antiquities Secretary-General Mostafa Waziri said there were scriptures and fragmented coffins in the tomb.

One of the  coffins presented a complete text, detailing the name of the tomb’s owner, Tjt.

“A [painted] wooden coffin was found inside the tomb containing the whole hieroglyphic text, in which the mission was able to find out the name of the cemetery owner Tjt as well as a text for the funerary rites (prayers) of the third region of [Aga] Khan, and gods of the Nile’s First Cataract [Anuket, Khnum, and Satet],” Waziri said in the statement.

Aiman Ashmawy, head of the Egyptian mission from the Ministry of Antiquities, said the tomb had a ladder to the side chamber where a stone-carved sarcophagus was stored. Another stone fragment was found in front of a group of mummies in a “poor state of preservation,” he said.

The archaeological mission has finished drawing a complete map of about 300 individual tombs in the area around the mausoleum. All tombs are estimated to date between the sixth century B.C. and fourth century A.D.

Egypt regularly announces new discoveries, hoping to spur the country’s tourism sector, which has suffered a major downturn since autocrat Hosni Mubarak was removed from presidency back in 2011. He effectively surrendered political power to the Supreme Council of the Armed Forces, sparking mass protests just two years later.