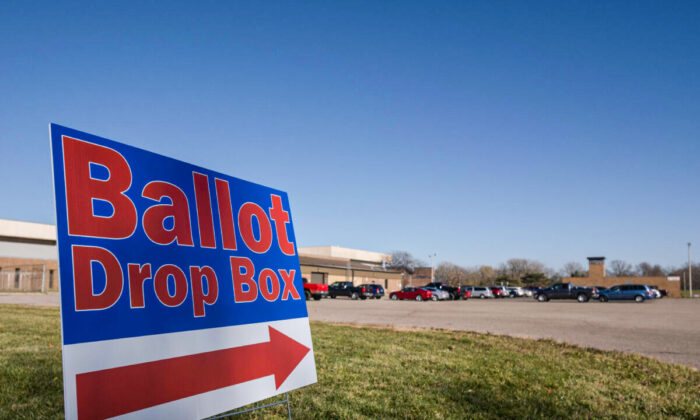 A sign pointing in the direction of a ballot drop boxes in Michigan on Nov. 3, 2020. (Seth Herald/AFP via Getty Images)
Viewpoints

I would think that any American, regardless of political affinities, would find this movie deeply disturbing. If you’re a Democrat and believe that the 2020 presidential election was the cleanest, most honest election in American history, then you will see “2000 Mules” as the most wicked slander. If you think that the election was stolen, you will look at the visual evidence presented in the film and be upset about at least two things—that the election was compromised, if not stolen, and that perpetrators of that heist are getting away with it, despite visual evidence catching them in the act.

The suspicion or belief that the election was stolen has been gnawing at our polity since the day after the election in 2020. While the Jan. 6, 2021, mess at the Capitol was the most visible manifestation of that belief, millions of Americans have serious doubts about the election’s integrity. This adds mega-doses to the partisan poison that is wracking our body politic.

At present, “2000 Mules” is exacerbating the partisan divide. D’Souza extrapolates the alleged findings of True the Vote and makes it appear that it’s a mathematical certainty that the 2020 presidential election was stolen. But what can be done? As was so painfully evident in the disquieting days between Election Day and Jan. 6, our constitutional system has no mechanism or prescribed procedure for reviewing and possibly overturning a national election.

Our country has a huge need for resolution and closure on the issue of electoral fraud in November 2020. It’s too late to reverse that election, even if proof of such cheating eventually emerges on a scale when even some Democrats concede that the election really was stolen. The most pressing need now is to replace the current widespread distrust in election integrity with confidence in future electoral fairness.

I believe that “2000 Mules” has the potential to push us closer to at least partial resolution if it impels legal authorities to either verify or debunk the many scenes in the movie that depict what appear to be blatant instances of illegal balloting. Those scenes are powerful, but the key question is: Can it be proved that these really were illegal actions, or were those scenes somehow faked or mischaracterized?

Attorneys general and secretaries of state in the five states focused on in the movie—Arizona, Georgia, Pennsylvania, Michigan, and Wisconsin—should conduct formal investigations, hearings, and trials to adjudicate the allegations that D’Souza and company made in the film. If nothing is done to determine whether the allegedly nefarious actions depicted in the film are sound or bogus, then millions will approach the 2024 election convinced that electoral fraud can be committed with impunity.

Think about it: If people can be caught on film cheating and nobody even attempts to bring them to justice, won’t that just encourage such cheating on an even larger scale in the next election? These cases of alleged fraud simply must be investigated by the proper legal authorities. To neglect to do so would be egregiously irresponsible.

As uncomfortable as it may be, one side or the other is wrong about the 2020 election, and the American people deserve to know which side it is. Can D’Souza’s film be debunked? I have read that at least one so-called mule was merely dropping off ballots for five or six family members. But what about the cellphone pings showing these mules visiting multiple ballot box locations, not to mention the not-for-profit offices where they allegedly received ballots? The “ping trail” seems convincing. But is it irrefutable proof, or are there other possible ways to interpret the ping patterns? There are three possible conclusions that a thorough investigation could lead to: (1) that the pings prove that mules visited multiple ballot boxes; (2) that the conclusion drawn by the filmmakers is one of several plausible possibilities, hence not conclusive proof; (3) that the ping data records were misused, either innocently or deliberately. We, the people, deserve to know the truth about the pings, and if, by chance, it can be proved that the filmmakers wrongly used the data, then they should be discredited and, if it was done maliciously, they should be punished.

On the other hand, if investigations convincingly prove that there was indeed widespread illegal mischief perpetrated by “mules” in collusion with not-for-profits, then the guilty individuals should be punished. It needs to become common knowledge that people who submit fraudulent ballots will pay a price for such mischief. It won’t undo 2020, but it surely will deter others from committing such mischief in future elections.

A digression: What would be a “fair price” for someone to pay for cheating and possibly stealing a U.S. presidential election? Personally, I find a jail sentence less than satisfying. Jails are such vile places, dumpsters fit only for such subhuman creatures as murderers and rapists. Nor would I be enthused about assessing big fines. Our rapacious governments already spend and take too much money.

My favored punishment isn’t currently available, and it would be immensely controversial, but maybe we should think about introducing it in this country. I am referring to the ancient Athenian practice of exiling malefactors. In my eyes, someone willing to try to steal an election doesn’t believe in the American values of honesty, fair elections, the spirit of democracy, and the will of the people (as limited by the Constitution). In other words, such a miscreant isn’t a true American. So, ship them off somewhere (with their bank accounts intact), maybe to a place where undemocratic practices prevail—Russia, China, Cuba, or Venezuela come to mind. OK, that may be cruel and unusual punishment running afoul of the Eighth Amendment. Maybe we could get Canada or New Zealand to take them off our hands.

The bottom line is this: To ignore “2000 Mules” as if nothing irregular happened in the 2020 election would be a mistake. It will allow the open wound of doubts about that election’s integrity to continue to fester. As distasteful as the task might be, duly constituted officials need to thoroughly investigate what D’Souza’s film claims, ferret out the truth, and call to account whoever it is who has been trying to deceive or cheat us. We have to restore trust in our elections.