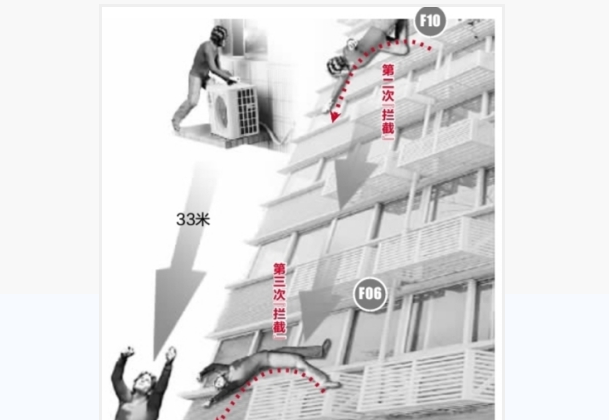 Screenshot showing the number of floors a Chinese man in Hubei Province fell, after losing his balance while trying to clean an air-conditioning unit. (Screenshot/Wuhan Evening News)
China

A man in Hubei Province did not die, despite falling 100 feet from an apartment building, reportedly because he was so overweight.

Mr. Yang, 33, lost his balance while cleaning dust off a faulty air conditioner at a friend’s place in Wuhan City, and fell out of the window, according to Wuhan Evening News.

He hit three external air conditioners on the way down, the first on the 15th floor and the second on the 10th floor. His fall stopped when he landed on the third air conditioner frame on the 6th floor.

“I don’t remember how I fell off the balcony,” Mr. Yang told the Evening News. “I only remember I was helping my friend clean the outside of the AC unit. I woke up in the intensive care unit and I felt pain everywhere.”

He was hospitalized with many broken bones and mild concussion, but no internal injuries. According Dr. Ai Fen, head of the emergency department at Wuhan Central Hospital, Mr. Yang’s obesity saved his life, because his 200-pound body weight protected his organs, and his size prevented from him falling between the railings of the sixth-floor air-conditioning rack.

Mr. Yang only stayed in intensive care for three days, and was discharged on Oct. 25. People made comments about his good fortune via Anhui News.

One said: “My AC unit was broken a while ago and the technician said he would charge 150 yuan ($25) for just going outside to check it, whether it needed fixing or not. I thought that was too expensive at the time. Not anymore.”

Another remarked: “He helped a friend to clean the AC unit. He seems like a warm person who likes to help others. Good people are rewarded and this saved his life.”

A third said: “He received divine help! It has nothing to do with his fat acting as a cushion. Ask a sumo wrestler from Japan to jump off from the fifth floor and see if he survives. It’s 17 floors we’re talking about here.”