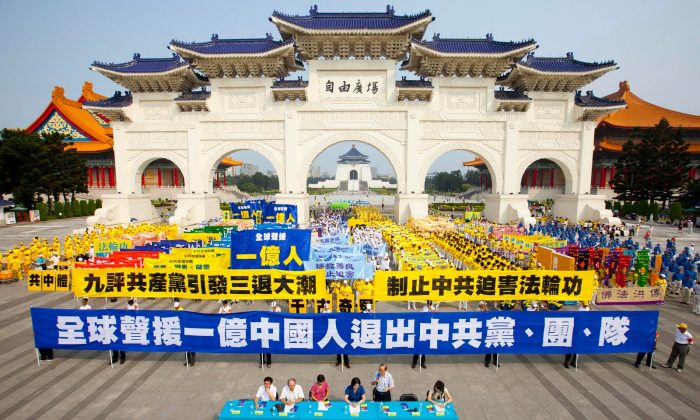 2,500 people took part in a rally and a parade in Taipei to celebrate more than 100 million Chinese people who have quit the CCP on Sept. 4, 2011. (Courtesy of Tuidang.org)
Quitting the Chinese Communist Party

Tuidang, Chinese for “Quit the Party,” is likely history’s largest grass-roots movement. First started in 2004, as of April 14 it has garnered 200 million renunciations, from Chinese people of all walks of life.

Six decades after the Chinese Communist Party violently seized power, it presides over a nation of 1.3 billion who are burdened with political oppression, entrenched corruption, and a deteriorating natural environment.

Tuidang gives the Chinese people the opportunity to separate themselves psychically and morally from the communist regime and express their intention that it should end.

The movement was brought to life by “Nine Commentaries on the Communist Party,” an Epoch Times editorial series published in November 2004. The “Nine Commentaries” uncensored history of the Party struck a chord with the Chinese people, and soon after the series was published the paper began receiving tens of thousands of statements from Chinese expressing their unhappiness with the Party and their desire to withdraw from it.

Now the Tuidang Center solicits statements of renunciation from individuals who are or have been members of the Chinese Communist Party and its affiliated youth organizations, the Young Pioneers and Communist Youth League. These renunciations are then published on the Center’s Chinese-language website.

An estimated 20 million volunteers in mainland China help spread information about the movement and register their compatriots’ statements, which are most often done using a pseudonym for safety. In addition, a number of volunteers around the world solicit renunciations by calling mainland China or by hosting Tuidang Center booths in Chinatowns and popular tourist spots around the world.

Most of the volunteers are practitioners of Falun Gong, a traditional Chinese spiritual practice. In 1999 the Chinese Communist Party launched a campaign meant to eradicate Falun Gong.

Zhong Weiguang is a Chinese dissident and scholar of totalitarianism residing in Germany. He sees the massive number of renunciations as an indication of the Chinese people’s general loss of hope for the communist regime.

“More than 200 million people have quit the Communist Party. Were there no persecution or rule by terror, and if you had everyone give their opinion on communism, then I believe the majority would agree to throw the Party on the scrapheap of history,” Zhong said in an interview with Epoch Times.

Even the ranks of the Party itself are haunted by a dearth of faith not just in communist ideology, but in the very system ostensibly built to support it.

Yan Fulan, a Falun Gong practitioner and Tuidang volunteer living in the United States, works with a team that makes daily phone calls to Chinese officials, including those in the security agencies tasked with persecuting Falun Gong. Despite the nature of their work, many individual officers have expressed disappointment in the Communist Party.

“After we talk to them … they say things like, ‘Now I understand.’ They’ll quit [the Party] very readily. They say that we foreign [Falun Gong] practitioners have called them so many times that they know the truth now,” Yan told Epoch Times.

One former officer working at Tiananmen Square in Beijing with the People’s Armed Police posted his statement on the Tuidang website in 2007:

“Back then, I didn’t see the truth and took part in the persecution of Falun Gong practitioners. Now I understand. I hereby renounce my Young Pioneers and Youth League membership, and declare void the oaths I once made [to those organizations.]”