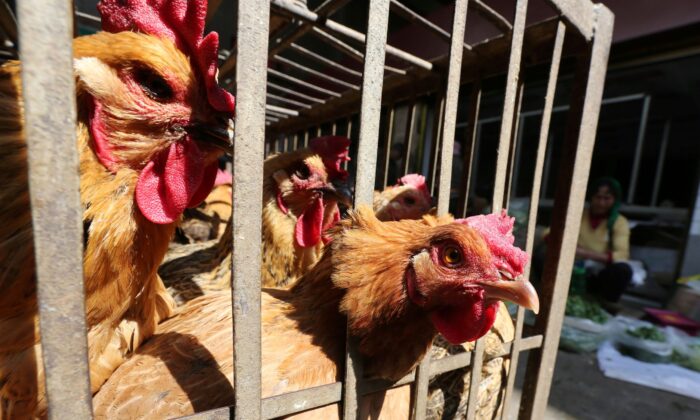 Chickens are seen in a livestock market before the market asked to stop trading in prevention of bird flu transmission, in Kunming, Yunnan Province, China, on Feb. 22, 2017. (Stringer/Reuters)
US News

Over 200 birds at the Baker’s Lake Forest preserve in Illinois are suspected to have died from an outbreak of H5 avian flu.

The flu outbreak was confirmed in laboratory tests conducted by the University of Illinois Urbana-Champaign. Further tests were conducted by the federal government, with wildlife biologists at the Forest Preserves of Cook County presenting seven cormorants for testing and necropsy to state pathologists on April 7. Staff members are monitoring Forest Preserve sites for signs of flu but have not yet noticed infections at any of the locations.

Speaking to NBC Chicago, Chris Anchor, wildlife biologist for the Forest Preserve District of Cook County, said that the avian flu affecting Baker’s Lake Forest reserve is the same one causing “massive die offs” in the poultry industry throughout North America. The mass deaths at Baker’s Lake indicate a shift in virus behavior, he warned.

“This represents a very significant change in the behavior of the virus. Up until this point we’ve only seen groups of two, three, half a dozen birds succumbing to it. In this instance, we actually have hundreds of birds that have succumbed to it,” he said.

“We have millions of birds moving from the south to the north and places like this they can become infected and move the virus along.”

Millions of chickens and turkeys raised on commercial farms across multiple states have been killed this year due to flu. In Illinois, two incidents of outbreaks have been reported in Carol and McLean counties.

The disease is said to be spreading from droppings of wild birds like geese and ducks. The flu was initially discovered in Indiana in February and was the first such infection in the country since 2000.

Baker’s Lake preserve is home to one of the most significant heron rookeries in the Midwest. The impact of avian flu has so far been observed only among waterfowl and water birds.

Passerines, which include perching birds like sparrows, songbirds, and finches have not been infected by the flu. As a result, the Forest Preserves has not issued a recommendation to remove birdfeeders that limit any potential transmission.

According to the U.S. Centers for Disease Control and Prevention (CDC), people should always avoid direct contact with wild birds as a precautionary measure against flu and must only observe them from a distance. Wild birds can carry the avian influenza virus even if they do not look sick.

“Avoid unprotected contact with domestic birds (poultry) that look sick or have died … Do not touch surfaces that may be contaminated with saliva, mucous, or feces from wild or domestic birds,” the agency warns.