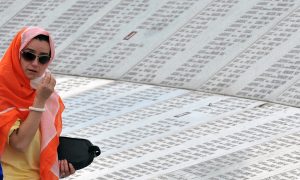 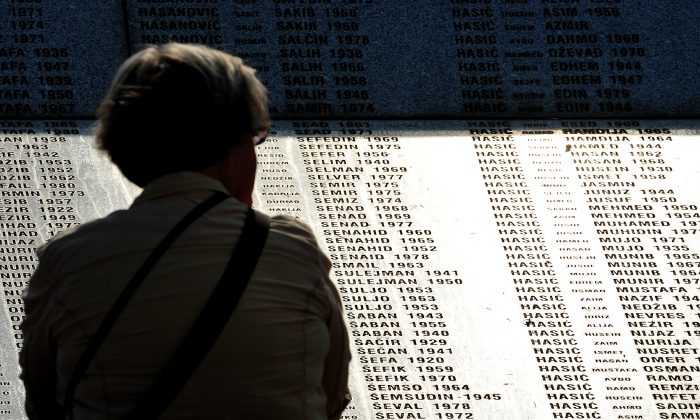 A visitor stands in front of the memorial wall at the Potocari Memorial cemetery near the Eastern-Bosnian town of Srebrenica, on July 4, 2013. (Elvis Barukcic/AFP/Getty Images)
Opinion

20 Years After Srebrenica, Ethnic Cleansing Has Become a Defense to Genocide

It has been 20 years since Bosnian Serb forces killed and secretly buried more than 7,000 Muslim men and boys over three tragic days in Srebrenica. The awful event is the only legally recognized genocide to have taken place in Europe since World War II.

But as the world prepares to mark the incident, Russia has vetoed a UN resolution to acknowledge that genocide took place at Srebrenica. Its ambassador dismissed the resolution as a politically motivated attempt to blame one side for the terrible events that took place in the Balkans in the 1990s.

It is fairly clear that people do not like genocide—not enough to stop committing it, but just enough to protest vehemently if they or their ancestors are accused of it.

This is just the latest twist in a dispute about whether the killings were genocide and, if they were, why other terrible war crimes committed during the collapse of the former Yugoslavia were not.

It is fairly clear that people do not like genocide—not enough to stop committing it, but just enough to protest vehemently if they or their ancestors are accused of it. Take for example, how Turkey reacted to claims by Pope Francis that Ottoman Turks had engaged in “the first genocide of the 20th century” when they killed 1.5 million ethnic Armenians in World War I.

There has been a similar reluctance to accept the magnitude of what happened in Srebrenica. The day after being sworn in as president of Serbia in 2012, Tomislav Nikolic went on Montenegrin TV to say that the Srebrenica killings were a war crime, by people who should be brought to justice—but that the events were not genocide. A year later, he made an historic apology for the killings but maintained that it had not been proven to be genocide.

All this despite the fact that the International Court of Justice (ICJ) and the International Tribunal for the Former Yugoslavia (ICTY) have both accepted that genocide has, in fact, been proven in relation to Srebrenica.

Aleksandar Vucic, the current prime minister of Serbia, is reportedly preparing to attend the official 20th anniversary commemorations of the massacre, but this has angered some people because there is still no official acceptance by Serbia that genocide took place.

Perhaps the most staggering thing about this debate, though, is that Srebrenica is the only incident legally classified as genocide in the Yugoslav conflict, despite all the other atrocious war crimes and crimes against humanity that are known to have taken place.

This sets it apart, according to the 1948 Genocide Convention, which is where genocide and its special intent are defined. Or, more specifically, according to how the convention has been interpreted by high-profile courts and tribunals.

Perhaps the most staggering thing about this debate, though, is that Srebrenica is the only incident legally classified as genocide in the Yugoslav conflict.

It would seem that, according to the ICJ, trying to make a geographical area “ethnically homogenous” does not show the special intent required for genocide because it does not single out a specific protected group.

Likewise, forced displacement, even when accompanied by mass killings, does not count as genocide because it does not “destroy” the protected group. The same conclusion was reached by the International Commission of Inquiry on Darfur. The commission’s 2004 report found that “generally speaking” the policy of attacking, killing, and forcibly displacing members of some tribes in Sudan did not display the special intent needed for genocide. Instead the people who planned and organized attacks on villages pursued the intent to drive the victims from their homes.

What’s more, the threshold for implying special intent has been set at a very high level. It must be shown that there is a pattern of conduct from which “the only reasonable inference to be drawn” is an intent by the relevant authorities to destroy the protected group.

When Ethnic Cleansing Becomes a Defense

The effect of this is that if a case goes to the ICJ via the Genocide Convention, reparations or other remedies can only be given if genocide is proven. If the abhorrent actions do not carry that special intent, they might still be war crimes and crimes against humanity but the ICJ is powerless to act against states that commit the actions. The individual perpetrators might face trial, but there can be no sanctions against the state they served.

The unfortunate consequences of this were brought into stark relief earlier in this 20th anniversary year in the case of Croatia v. Serbia.

In this case Serbia did not contest the “systematic and widespread” nature of certain attacks against the Croatian people. It argued that the attacks “were intended to force the Croats to leave the regions concerned.”

It cannot be right that ethnic cleansing has become a defense to genocide.

The ICJ accepted this, and repeated the findings of the International Criminal Tribunal for the former Yugoslavia, which had found that various war crimes and crimes against humanity were aimed at forcing the Croats out of certain regions rather than destroying the group. The Serbian defense was that it was not committing genocide because, instead, it was carrying out ethnic cleansing.

It cannot be right that ethnic cleansing has become a defense to genocide. When mass killings accompany massive forced displacement, with a goal of creating an ethnically pure state, then let’s be frank and call those mass killings genocide. At least then, we might stand an outside chance of being able to give support to victims and their families, and to rehabilitate those who deny, or even celebrate, their role in or support for genocide.

James Sweeney is a professor at the Lancaster Law School, Lancaster University, in the U.K. This article was originally published on TheConversation.com