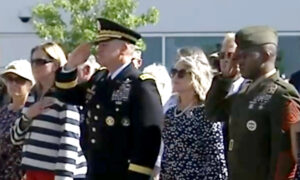 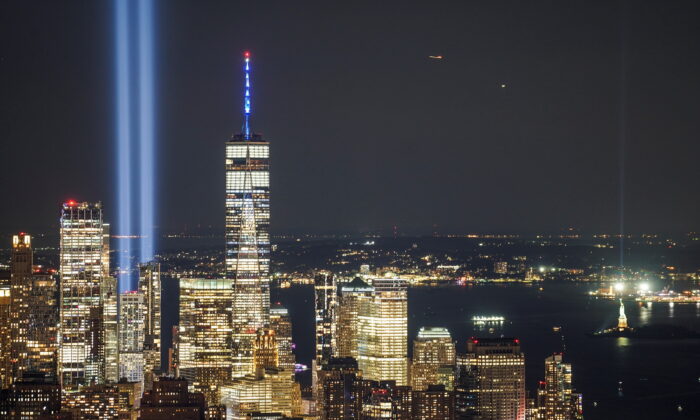 The Tribute in Light art installation is seen from Empire State Building, commemorating the 20th anniversary of the Sept. 11, 2001, attacks, in New York City on Sept. 11, 2021. (Go Nakamura/Reuters)
National Security

20 Years After 9/11: Did War on Terror Achieve Its Objective?

Twenty years after the Sept. 11 attack, the question remains as to whether the mission in Afghanistan achieved its objective of eradicating terrorism.

Allen Weiner, international legal scholar and senior lecturer at Stanford University, said that the initial goal to destroy al-Qaeda’s base in Afghanistan was largely achieved.

“Al-Qaeda’s training camps in Afghanistan were destroyed, many of its leaders were killed and captured (although some, including Osama bin Laden, managed to escape at least initially), and its ability to plan, finance, and execute major global terrorist operations was severely diminished,” Weiner said in an interview published on the university’s website.

However, the initial success didn’t last, Weiner said, “although al-Qaeda never resumed significant operations in Afghanistan, the organization metastasized, and lethal variants of the organization arose in” other countries in the Middle East and elsewhere. Also, other terrorist groups such as ISIS emerged, he said.

Al-Qaeda, designated as a terrorist organization by the Department of State in 1999, was behind the terrorist attack of Sept. 11, 2001, which killed almost 3,000 Americans and international citizens.

After the Sept. 11 attack, the United States invoked the NATO treaty’s clause of collective defense, which stipulates that an attack against one member is considered an attack on all members of the alliance.

As a result, the NATO forces led by the United States invaded Afghanistan in response, with a goal “to ensure that the country does not again become a safe haven for international terrorists,” according to a NATO statement.

Al-Qaeda had at the time of the attack a “symbiotic relationship” with the Taliban regime in Afghanistan, which effectively controlled most of the country, Weiner said.

“President Bush and others quickly began to emphasize an additional objective for overthrowing the Taliban—to liberate the Afghan people from the regime’s repressive practices. We sought to promote basic human rights and to end the Taliban’s oppression of women,” he said.

Afghanistan did make significant progress in terms of economic development and the realization of at least some civil and political rights, the scholar said. However, the Taliban wasn’t eradicated and the civil war against the Afghan government continued with varying degrees of intensity until early August, he noted.

Who Are the Taliban?

The Taliban comprises diverse groups, according to Ahmad Farid Danesh Akrami, currently a political analyst based in Poland, who was a journalist in Afghanistan until 2014.

Some of those groups are closer to ISIS, while others are locals who want some peace and stability, Akrami said in a conversation at Warsaw Institute, a Poland-based think tank.

In the past, the Taliban allowed bin Laden to operate in Afghanistan, and the group has a very deep ideological connection with Islamist and radical groups around the globe, Akrami said. In his opinion, countries shouldn’t recognize the Taliban or maintain any political relationship with it because “it’s very dangerous for the future of the world.”

The Taliban are an ideological group, and their ideology is based on Sharia law, and they won’t accept any other ideology, Akrami said.

“The Taliban structure is a bit different than what the other governments are. So we cannot expect that the Chinese influence can change the behavior of Taliban.”

The political leadership of the Taliban most of the time needs to ensure support from local Taliban forces and will be unwilling to take any action without their support, Akrami said.

ISIS in Afghanistan is different from ISIS groups in Syria and Iraq, according to Akrami. It’s a more intelligent group, in his opinion, acting as “intelligent proxy fighters in the region” and heavily influenced by Pakistan.

If the Taliban doesn’t want to accept responsibility for an attack, they would say ISIS did it, and ISIS would claim responsibility, Akrami said.

ISIS in Afghanistan is called ISIS of Khorasan Province (ISIS-K); it emerged in 2015. It was joined by some other radical groups in the region, some of which are inside the Taliban, Akrami said.

Afghanistan has historically never had a strong nationalist state, the analyst said. Moreover, a quarter of the country’s territory is covered by high rocky mountains with big caves that create favorable conditions for guerrilla wars, he said.

“Afghanistan military was able to fight for long term. We had around 370,000 police and army. So we had around 45,000 commando forces. … And in most parts of Afghanistan, the army didn’t fight with the Taliban. They just give the areas to the Taliban and left.”

Akrami thinks Afghanistan’s collapse began with the negotiations between the United States and the Taliban in Qatar. He considered these negotiations a strategic mistake by NATO and America because it helped the Taliban, a terrorist organization, to boost its image as a strong force respecting people’s rights, Akrami said.

There could be other important reasons for Afghanistan’s collapse, but there’s not much information about it, Akrami said, hoping that eventually, more will become known.