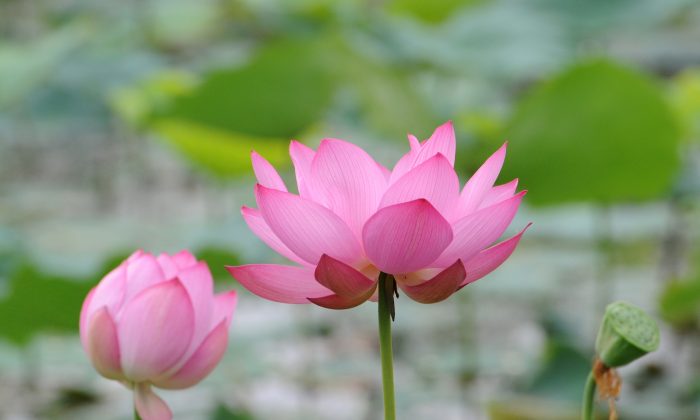 Wang Dushan forwarded two pictures over the Chinese Internet: three lotus flowers with the words “truthfulness, compassion, tolerance” in Chinese characters above, and promotional material for a Chinese dance company’s show in 2013. For this, the 20-year-old was then thrown in detention and put on trial.

Both pictures are linked with Falun Gong, a traditional Chinese spiritual discipline whose practitioners have been persecuted for the past 16 years. But the Chinese authorities’ treatment of Wang Dushan is baffling because he isn’t a Falun Gong practitioner.

Wang was taken into custody on July 11 in Beijing, where he worked. He was later transferred to Ganyu Detention Center in his native province of Jiangsu in eastern China, according to a report by New York-based Chinese language broadcaster New Tang Dynasty Television (NTD). NTD and Epoch Times are subsidiaries of the same corporate parent, Epoch Media Group.

Police said Wang Dushan was arrested for propagating Falun Gong over the Internet. A court in Ganyu District charged Wang with undermining the implementation of law.

The words “truthfulness, compassion, tolerance” in the lotus flower picture are the principles of Falun Gong; many performers in the Chinese dance company Shen Yun Performing Arts are adherents of the discipline.

But Wang “doesn’t practice Falun Gong,” Wang’s relative told NTD in a telephone interview. “He’s just a kid who got into trouble for downloading some pictures.”

Former Chinese Communist Party chief Jiang Zemin on July 20, 1999 launched a campaign to “eradicate” Falun Gong. The practice, which consists of five sets of slow-motion exercises and moral teachings, had attracted between 70 and 100 million Chinese, according to official and Falun Gong numbers respectively.

According to Minghui.org, a clearinghouse of information about the persecution of Falun Gong, over 3,900 practitioners have been killed by torture and abuse, and hundreds of thousands languish in detention.

Researchers estimate that the Chinese regime has harvested the organs from 65,000 living Falun Gong practitioners between 2000 to 2008, and in the process, killing them for profit. Researchers believe the forced organ harvesting is continuing, and the death toll is believed to be far higher.

The persecution of Falun Gong usually extends to practitioners’ family members, and Chinese workplaces often terminate practitioners from their jobs under pressure from the Chinese authorities.

Even in the context of that campaign, the arrest of Wang Dushan and the subsequent trial appear to be particularly aggressive.

Judge Sun then restricted Zhang to a 10 minute presentation. He also sneered when Zhang made his defense, declaring that he had sat on many such cases, and that the lawyer shouldn’t mention things irrelevant to the case, according to an account of the trial carried by Minghui.

Zhang also said that Wang does not practice Falun Gong, and even if he did, Falun Gong is not illegal in Chinese law.

Rather, the Chinese regime’s highest legal bodies had “committed a very fundamental mistake” in 1999 when they “complemented the needs of Jiang Zemin’s campaign against Falun Gong” and prosecuted Falun Gong practitioners, Zhang said.

Wang Dushan is still being held in Ganyu Detention Center and has not yet been sentenced.