20 States Planning to Reopen Their Economies in Near Future: Trump 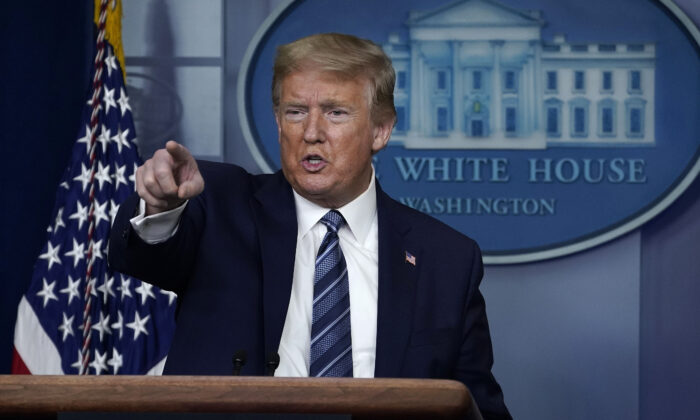 President Donald Trump said Tuesday that 20 states plan to reopen as the United States passed the peak of the CCP virus outbreak.

“We are opening up America again,” Trump said during the White House press briefing on the CCP (Chinese Communist Party) virus, also known as the novel coronavirus. “Twenty states, representing 40 percent of the population, have announced they are making plans and preparations to safely restart their economies in the very near future. Three announced today.”

The legislation in this round of stimulus funding approves $482 billion in aid, including for small businesses, and for hospitals to increase testing.

It comes days after the Small Business Administration’s Paycheck Protection Program (PPP)—which was passed last month as part of the third stimulus package—ran out of money, meaning no new loans could be issued until it was replenished. The new bill provides an additional $310 billion for the program.

The funding package includes $50 billion for disaster relief loans, which would enable to government to lend up to $300 billion. Funds for hospitals and COVID-19 testing make up the bulk of the rest of the funds.

The CCP virus has been linked to at least 176,926 deaths globally and infected over 2.5 million people as of Tuesday afternoon, according to official government data collated by Johns Hopkins University.

The numbers are considered inaccurate by many because of a lag in data collection by governments as well as significant underreporting of known cases and deaths by the regime ruling mainland China.

When asked if he expected more stimulus bills to be passed in the future, Treasury Secretary Steven Mnuchin said several areas could be the focus of future proposals, including infrastructure and payroll tax cuts.

It also depends on the performance of the economy after reopening, and how much money the Federal Reserve System will input, he added.

“We look forward to business rebounding, especially later this summer,” he said.