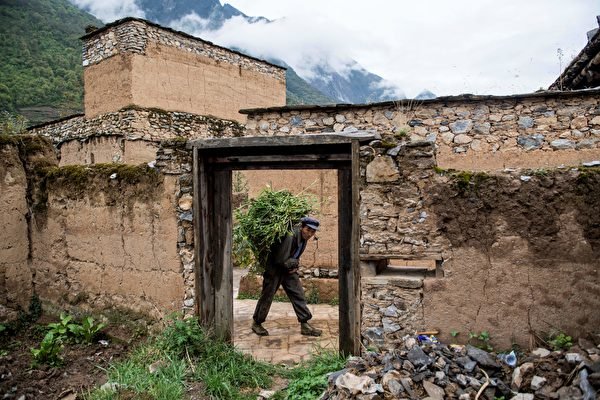 A villager carrying food for his livestock passes devastated houses in the old village of Luobozhai (Radish Village), which was damaged during the 2008 Sichuan earthquake, in Wenchuan county, Sichuan Province, on April 23, 2018. (Johannes Eisele/AFP via Getty Images)
China

The Chinese Communist Party (CCP) announced back in July that it had achieved a complete “moderately prosperous society” and eliminated “absolute poverty” in China.

However, recent research shows that the number of individuals from households with less than 500 yuan ($80) per capita monthly disposable income has exceeded 220 million in China, a sharp contrast to the statements proclaimed by CCP leader Xi Jinping in remarks for the Party’s 100th anniversary.

In the “China Statistical Yearbook 2021” published by the National Bureau of Statistics, 20 percent of all households in China have a per capita monthly disposable income of 656 yuan (US$103), which translates to around 280 million people.

Discrepancies exist in the CCP’s data, however.

In the white paper “China’s Epic Journey from Poverty to Prosperity” published by the CCP in September, the lowest “per capita monthly disposable income” level for rural households in 2020 is 2.7 times higher than what was shown in its yearbook.

Furthermore, in the article “220 million Chinese Earn Less Than 500 Yuan Per Month: CICC Research Report” published by a digital finance think tank on Tencent News, there are at least “220 million individuals in China” with less than 500 yuan of monthly disposable income.

The conclusion drawn by the think tank was based on an unpublicized research paper written by China International Capital Corporation, the first joint-venture investment bank in China. It also coincides with the statement made by Premier Li Keqiang during a press conference last year that “China has 600 million people with a monthly income no more than 1,000 yuan.”

To contextualize Li’s remark, it’s also worth mentioning that the poverty alleviation standards used by the CCP are significantly lower when compared to those used by its international counterparts.

With prices adjusted for inflation, the absolute poverty threshold in China is roughly 35 percent lower than the International Poverty Line of US$693.50 per year, based on data published by the National Bureau of Statistics in 2019.

Overall, the top income bracket in China has grown rapidly in recent years, as noted by the Hurun Research Institute in its “FOTILE·Hurun Wealth Report 2020” published on Feb. 8, 2021.

“High-end consumers are of particular concern because they’re the main driver behind domestic demand. ‘High-net-worth families’ account for about 0.3 percent of China’s population, but generate 3 percent of the country’s GDP,” the report concluded.