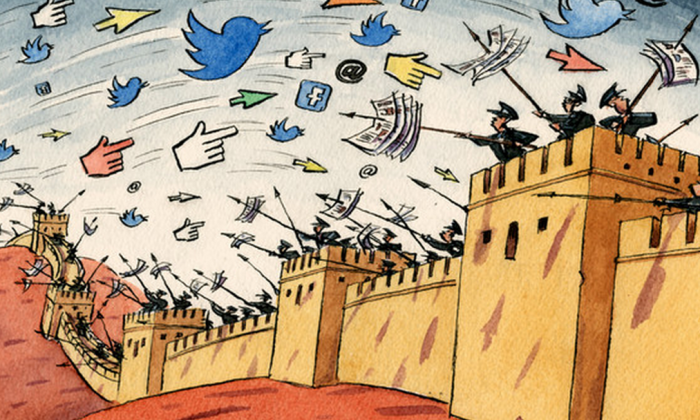 Shooting over the Great Firewall of China, which refers to China's censorship apparatus. (Screenshot via blog.xuite.net)
China

What do June 4, Falun Gong, and despotism have in common?

They’re all terms censored by the Chinese regime. As Internet use proliferates in China, so too does the internet blockade erected to obstruct the free flow of information.

June 4, 1989 is the date of the bloody Tiananmen Square Massacre, when authorities killed hundreds if not thousands of student protesters and violently suppressed thousands more. As a result, any combination of 6, 4, and 89 is blocked.

The term “Falun Gong” refers to the peaceful self-cultivation and meditation practice that was banned in 1999 following the launch of a nationwide persecution against the practice and its believers. And despotism was placed on the blacklist so that people in Chinese would not be able to criticize the regime with the term.

The regime’s censorship mechanism reaches all areas of the Internet: from Western news sources like BBC and Voice of America, to websites and search terms related to Tibetans, Falun Gong practitioners, or other persecuted groups, to any other material deemed sensitive or dangerous to the communist regime.

Chinese netizens have therefore turned to more creative measures to communicate on the internet and criticize government policies, since any word or phrase remotely resembling dissident speech unsettles the authorities and finds itself on the list of censored content.

Below are some of the ingenious code words, homonyms, and purposeful misnomers, obtained from a comprehensive list by China Digital Times, that Chinese netizens use to avoid censorship on the Internet.

Explanation: Since the word freedom  (自由 zìyóu) is censored, Chinese netizens used “eye-field,” which in Chinese looks like the characters for freedom minus the topmost portion (目田  vs. 自由). It was invented back in 2010, when World of Warcraft players in China realized many words were blocked in the latest version of the game. For some it looks like gibberish, but for those who know the meaning, it is a veiled jab at the Chinese regime.

Code words for: Resisting the state by marching through the streets.

Explanation: In China, since it is difficult to strike, applications to hold protests are routinely denied, and petitioning the government is similarly fruitless (or dangerous), citizens have turned to more creative means of protesting state actions, like “taking walks.”

In 2007, protestors in Xiamen began “taking walks” to protest the construction of a potentially dangerous paraxylene (PX) processing plant. Similar to taking a walk, “going sightseeing” is also a guise citizens use when they want to go to Beijing to petition against some state action, since officials do not look kindly on petitions. When authorities try to stop them, they say “What law says we can’t all walk to Beijing to sightsee?”

Code words for: A house visit by the police.

Explanation: Since suspicious residents often refuse to open the door to police, instead of violently forcing the door open, which is tiring and time-consuming, police often pretend to be from the water utility company to trick occupants into opening their doors.

Code words for: The Domestic Security Department (DSD), a branch within the Ministry of Public Security that deals with dissidents, human rights activists, religious groups, and other so-called subversives in China.

Explanation: “National treasure” (国宝-guóbǎo) is a homonym of the DSD (国保-guó bǎo). DSD officials are not subjected to the same oversight as regular police and security officials and enjoy broader powers to violently suppress dissidents or other “dangerous” elements. As the panda is considered China’s “national treasure,” Chinese netizens often use the panda as a symbol of the DSD.

Code words for: To die in police custody under suspicious circumstances.

Explanation: The phrase was used to refer to cover-ups of police brutality after prison authorities said a farmer in detention for illegal logging had died from a head injury sustained while playing hide-and-seek with other inmates.

Explanation: Chinese netizens term the Internet blockade a wall they try to jump over using a different software, such as VPNs (virtual private networks) that hide their IP addresses.

Explanation: The nickname refers to how these officials appear to be “naked,” or without any assets. In China, corrupt officials siphon billions out of China to their bank accounts overseas while ignoring the needs of China’s impoverished.

Explanation: An outlandish piece of architecture, the building of China Central Television, China’s largest state-run broadcaster and propaganda mouthpiece, is widely ridiculed in the mainland for resembling a pair of underwear or a person squatting over a toilet.

Explanation: After Kim Jong Un became the leader of North Korea, Chinese netizens used the term to ridicule the dictator.

Explanation: The pejorative nickname gained traction because of the Chinese regime’s tendency to send aid to foreign countries while neglecting domestic problems. For instance, in November 2011, China donated 23 buses to Macedonia, not long after a bus crash in Gansu killed 20 people, including 18 children, according to China Digital Times. The bus had only nine seats, but had been carrying 64 people. Outraged netizens criticized authorities for sending buses meeting safety standards to Macedonia while neglecting to fix China’s own shoddy bus problem.

Explanation: The terms are commonly used to invoke a crowd to gather around an event or person online or in the real world and closely observe it. With heavy public scrutiny, authorities won’t be able to cheat the people.

Code words for: A police interrogation

Explanation: The Chinese people commonly use the euphemism of someone being invited to drink tea to address being taken in for questioning by the police. Chinese police rely heavily on coercive incentives, like offering “tea,” to make people say something. But when that doesn’t work, they move to threats or violence.

Code words for: So-called experts who understate safety risks or justify terrible economic conditions under the orders of state officials or corrupt businessmen.

Explanation: The first character (专) in “expert” combined with the character for “rock” (石) creates the character for brick (砖-zhuān), pronounced the same as the first term in “expert.” A play on words, it essentially means these experts are like rocks pandering to the wishes of authorities and lying to the people.

Code words for: Creation of a new social media account after a prior one is deleted by the social media company.

Explanation: The term is used figuratively to describe the “rebirth” of netizens on social media after their accounts are deleted for posting about sensitive issues. Political cartoonist Kuang Biao has “reincarnated” dozens of times on Weibo and adds the reincarnation count to each of his new usernames. As of May 10, 2015, his username was “Uncle Biao Fountain Pen Drawings 47.”

Explanation: The nickname is used to lampoon Hu for always positively spinning government crimes and wrongdoings. For instance, during the scandal involving Bo Xilai, former party chief of Chongqing who was sentenced to life imprisonment for bribery, embezzlement, and abuse of power, Hu published an editorial titled “Bo’s Case Shows Resilience of Rule of Law.” Netizens angrily criticized him for reporting optimistic falsehoods while omitting how China’s so-called “rule of law” allowed Bo to prosper and continue his corrupt misconduct for decades.

17. Give the People Some Tape (给人民一个胶带-gěi rénmín yí ge jiāodài)

Code words for: Trying to prevent people from talking.

Explanation: Following the Wenzhou high-speed crash in July 2011 when two trains derailed each other killing at least 40 and injuring nearly 200, Premier Wen Jiabao called for an investigation into the incident to “give the people an explanation.” But on the contrary, authorities aggressively limited reporting on the incident and hastily buried (literally) the crushed train cars in what appeared to be a coverup of evidence. Since “tape” in Chinese is a homophone of “explanation,” indignant netizens used the phrase “give the people some tape” to describe the government’s attempt to hide its failures and prevent people from talking about the tragedy.

Explanation: “Word” (词-cí) and “porcelain (瓷-cí), sound the same, so Chinese netizens refer to all sensitive words or phrases, from major dissidents to religious movements, as “sensitive porcelain.”

Code words for: The current president.

Explanation: The derogatory term implies the head of state was anointed the position, rather than popularly elected, and possesses almost absolute power. It was blocked from Weibo search results on August 21 last year.

Code words for: The country of the Chinese Communist Party.