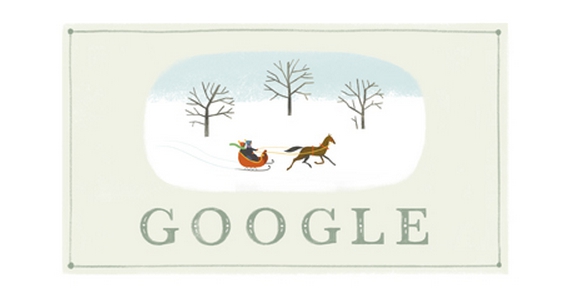 Google Doodles are older than Google itself. The first Doodle was made in 1998 before the company was incorporated. It was very simple and the topic was the Burning Man festival, which draws thousands to the Nevada desert every year.

If you’ve never heard of Google Doodles, they’re the little drawings that change around the Google logo when you open a Google search page. Google creates Doodles to celebrate special occasions, anniversaries, birthdays, and more.

It was a difficult choice, but Epoch Times has selected the 20 best Doodles of 2013. One of the characteristics considered was the success with which Google incorporated the logo into the design.

The Doodles are listed in chronological order.

The Ferris Wheel and Valentine’s Day fit well together in this Doodle, as the ride’s inventor, George Ferris, was born on Valentine’s Day. Google successfully celebrated both occasions in one.

The Google logo is transformed into two big wheels, displaying different actions with every turn, spurred by your clicks.

Copernicus is without a doubt a key person in history, having helped shift the common perspective that the Earth is the center of the solar system to a heliocentric perspective. The Google logo became a miniature of his heliocentric model to celebrate his birthday.

Google’s Douglas Adams Doodle skillfully incorporates elements from his book “Hitchhiker’s Guide to the Galaxy,” in a friendly and bright Google logo. Included are Ford Prefect’s towel (Ford Prefect is a character in Adams’s novel), a nice cup of tea, and “Don’t panic,” written on the guide.

André Le Nôtre was a French landscape architect and the head gardener for King Louis XIV of France. The Doodle celebrating his 400th birthday imparted all the love for perfection found in the king’s garden, bringing a lovely calm to anyone searching Google that day.

Maria Merian is famous for her naturalist sketches, and when one considers that she drew them in the wild, they hold even more mystique.

The Piri Reis Map, or perhaps better known as “the lost map of Columbus,” is unique in that it shows how the world was seen in the 16th century. This year marked 500 years since the map was compiled by the Ottoman admiral and cartographer Piri Reis.

On this year’s Earth Day, Google gave users a chance to control the daylight or the wind on a little Doodle-Earth. Google captured the natural cycles of our planet in this Doodle.

On this day, Google was the place “Where the Wild Things Are,” to celebrate the creatures brought to life by award-winning illustrator Maurice Sendak.

Exactly 100 years ago, the Tour de France started as a way to increase sales for the magazine L’Auto. The now-famous sporting event was marked by Google with a dynamic Doodle showing two bikers racing, done in the style of a 20th century poster.

Google celebrated the famed Chinese doctor and herbatologist with a Chinese-style painting showing Li Shizhen with his plants. Moreover, the Doodle showed the herb names in Chinese characters when the mouse cursor was placed over them.

On the birthdays of pioneer radio astronomer W. Norman Christiansen, the Google logo was spread across the Milky Way. Thanks to “Chris” Christiansen’s observations, the Chris Cross Telescope bears his name.

It’s late evening in an old town, and Google Doodle takes you on a walk near a river with the sound of French composer Claude Debussy’s music to serenade you.

Thanks to Léon Foucault´s pendulum, we can better understand the Earth’s rotation. Google Doodle precisely replicated the French physicist’s pendulum, where you can set the rotation according to time and location.

The Mid-Autumn Festival is also known as the Moon Cake Festival. It is one of the largest celebrations of the year for Chinese and Vietnamese people, a time to celebrate the harvest. Google featured a fairy drawing with the gentle detail of light reflected on water.

The beauty of naturalist painting again inspired this Doodle, which celebrated the birth of British entomologist William John Swainson.

This Doodle has all the simplicity of a pencil drawing, yet it is very dynamic and strong. It marks the birthday of Raymond Loewy, who designed the GG1 electric locomotive of the 1930s.

This Doodle brings you to a meeting with the Swiss psychiatrist Hermann Rorschach during which you can interpret his famous ink blots.

A short animation about Thanksgiving in the forest was a nice, relaxing way to celebrate the holiday.