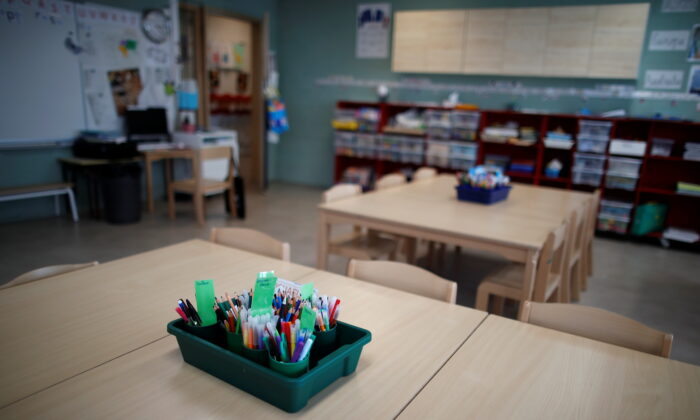 Tables and chairs in a closed classroom at the private primary school Jeanne D'Arc in Saint-Maur-des-Fosses, near Paris, amid the coronavirus disease (COVID-19) outbreak in France, on March 30, 2021. (Gonzalo Fuentes/Reuters)
Federal-State Relations

A joint letter by 20 state attorneys general directed to Education Secretary Miguel Cardona is asking the Biden administration to retract its education plans that would promote critical race theory (CRT) and The New York Times’ “1619 Project” in schools.

The group’s criticism centers on recent proposals from the Department of Education that detail plans in April to provide grants for a curriculum that teaches diversity and the effects of “systemic marginalization” under American History and Civics Education programs.

The letter (pdf), led by Indiana Attorney General Todd Rokita, claims that the proposed priorities issued by the Education Department are a “thinly veiled” effort to insert CRT and the 1619 Project into American classrooms.

“As the chief legal officers of our respective states, we write to express our deep concerns with the proposed priorities recently issued by the United States Department of Education. The proposed priorities are a thinly veiled attempt at bringing into our states’ classrooms the deeply flawed and controversial teachings of Critical Race Theory and the 1619 Project,” the letter reads.

It further argues that the new education proposals would distort the accuracy of history, rendering it at odds with state and federal law.

“CRT is an ideological construct that analyzes and interprets American history and government primarily through the narrow prism of race. Similarly, the 1619 Project seeks to ‘reframe the country’s history.’ As such, it distorts, rather than illuminates, a proper and accurate understanding of our nation’s history and governmental institutions and, therefore, is fundamentally at odds with federal and state law,” state the attorneys general.

The ideas being put forward by the 1619 Project suggest that the United States was founded on white supremacy and oppression and that these are still fundamental aspects of society.

“The Department should not adopt the proposed rule or, at a minimum, should make clear that grants may not fund projects that are based on CRT, including any projects that characterize the United States as irredeemably racist or founded on principles of racism,” they state.

Ibram X. Kendi’s works are specifically cited in the new priorities that progressive politicians want to implement, with the claim that they would reduce discrimination and racism.

The letter asserts that the biggest issue is the impact of the theories being promoted on students, and urges the department not to embrace the proposed measures.

In criticism of the potential adverse effect on students, the AGs refer to educator and political scientist Frederick Hess:

“Upon closer scrutiny, it quickly becomes apparent just how wholly Kendi’s doctrine is at odds with American traditions of equality, free inquiry, and ordered liberty. Kendi holds that every single thing in the world—every action, idea, thought, and policy—is either ‘racist’ or ‘anti-racist.’”

To illustrate their point, the AGs give an example that demonstrates the unfairness of “equity”—a term that stems from the Marxist idea of absolute egalitarianism.

“Kendi helped lead the opposition against the selection process for the elite Boston Latin School, the Boston Latin Academy, and the John D. O’Bryant School of Math & Science,” the letter reads.

“Relying heavily on a merit-based testing regime, Asian applicants received a disproportionately high number of the scarce 205 available seats. ‘With COVID as a pretext, equity advocates set up a new system to fill the spots based on zip codes and grades, a plan that will result in a 24 percent reduction in Asians, an 18 percent reduction in whites, a 50 percent increase in blacks, and a 14 percent increase in Hispanics.'”

Another notable criticism is aimed at the proposal’s alleged discrimination of students based on “privilege” or “oppressor” status, based only on racial identity.

“Teaching this in a classroom clearly runs afoul of broad non-discrimination provisions adopted by many states to prevent the same sort of separatist teaching that the guidance attempts to integrate into schools through teachers and students,” the letter states.

After attending the programs being put forward, the teachers would be violating Indiana law if they “indoctrinate students” discriminatorily, the coalition of attorneys general said.

The Department of Education told The Epoch Times: “We look forward to receiving the letter and responding directly to the signees.”