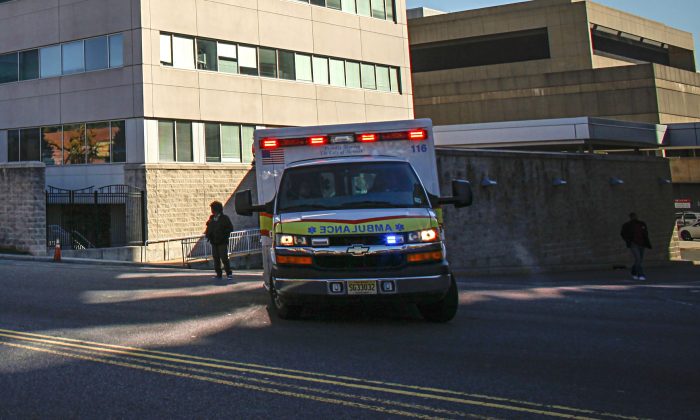 An ambulance in a file photograph. (Kena Betancur/Getty Images)
US News

A dog reportedly attacked a 2-year-old Texas boy at an adoption event several days ago.

Luca Romero’s mother, Allis Cho, told CBS Dallas that the boy was walking around the dogs that were on display at the Dallas Pets Alive adoption event. The dog, a pit bull mix, then attacked the child, according to the report.

“The dog lunged out and bit him in the right arm and chest, pulled him to the ground and was like flailing him around and four or five guys had to come to pry the teeth off of him,” Cho said.

He suffered cuts and puncture wounds on the chest and arm before he was taken to a nearby hospital.

“He probably only took two or three steps, and then the dog lunged out and bit him in the right arm and chest,” Cho told WFAA of the incident.

“It wasn’t just a bite where you just bite and release—it bit him and drug him to the ground would not let him go,” Cho added. “Four or five men had to come in and pry the dog off of him.”

The boy was traumatized by the incident, Cho said.

“I never got the names of the guys that helped out, but ‘wherever you are, thank you,’” said Alan Romero, the boy’s father.

The dog was taken into custody by Dallas Animal Services and is now on a 10-day quarantine for evaluation. An expert will then make a recommendation on what should happen to the dog, including euthanization.

“We just don’t want anyone else to get hurt, and if someone adopts this dog and gets hurt then whose fault is that,” said Cho, who believes the animal should be put down.

Cho said her son has been around dogs his whole life.

“He’s pretty gentle because we have a German shepherd at home, so we teach him not to hit the animals, to be gentle with them,” she told WFAA.

A representative for the Dallas Pets Alive adoption event issued a statement.

“We are aware of the incident that happened over the weekend and have been working closely with authorities (a police report was filed and we are awaiting a copy of the report at this time) and the family involved so we can gain a full understanding of what took place. Our first priority is always the safety of potential adopters and children who attend our events,” it said in the statement, reported CBS Dallas.

It added: “We are currently in the process of reviewing what happened and cannot share additional details until our investigation is complete. This was an isolated incident and we are reviewing all of the factors at play to prevent this from happening again.”