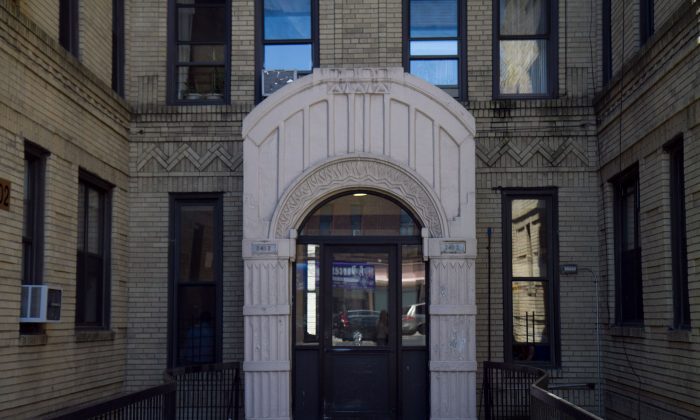 The apartment building where the family of 2-year-old Ruhshona Kurbonova lives, in Brooklyn on Saturday, July 5, 2014. The toddler drowned in a lake in Prospect Park after wandering away from a family gathering on Saturday. (Annie Wu/Epoch Times)
Crime and Incidents

2-Year-Old Found Dead After Wandering Away in Prospect Park

A 2-year-old girl drowned in a lake in Prospect Park in Brooklyn on Saturday, after she had wandered away from a family gathering.

New York Police Department divers found the body of Ruhshona Kurbonova after a five-hour search in the park. Ruhshona was pronounced dead at the scene.

In the Brooklyn neighborhood of the grieving family—a quiet residential area with a sprinkling of Russian, Chinese, and Latino businesses—about a dozen men congregated at a street corner across from the family’s apartment building on Sunday. One of them, who did not wish to be identified, said the men were from the same hometown in Uzbekistan as the family and had gathered to offer support and prayers to them.

Naser Youssef, 49, who owns a deli across the street from the family’s apartment building, said Ruhshona’s family were regular customers. Earlier in the day, Ruhshona’s older brother came in to buy groceries and asked Youssef if he could take a look at the front-page newspaper article about his sister’s death. “I said, ‘Sorry for what happened,’ and he didn’t say anything. He just nodded and left,” the deli owner said.

Youssef recalled that Ruhshona’s mother would come with her daughter often and buy candy and juice for her in the morning before dropping her off in preschool. “She was an active girl who smiled all the time,” Youssef said. “They’re a nice family, and it’s very sad this happened to them.”

The family had immigrated to the United States in 2010, Ruhshona’s uncle, Dekzod Isokov, told the New York Post. They were grilling meat for a family barbeque when Ruhshona and a boy relative wandered away. The boy was later found safe in the bushes near the lake.

Witnesses said Ruhshona’s mother collapsed upon hearing the news of her daughter’s death. She was taken to a hospital for evaluation and later released.

Youssef said the park should install barriers so that young children wouldn’t fall into the water. “It’s very dangerous,” he said. “I hope the lake will be more secure.”