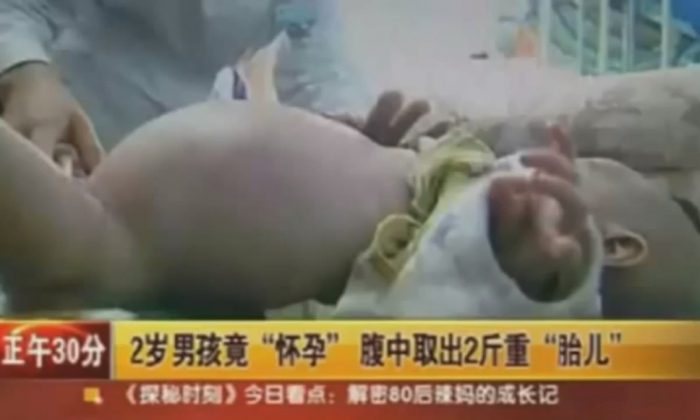 Screenshot showing a toddler in Eastern China, who had emergency surgery to remove a dead parasitic twin from his stomach. (Screenshot/Epoch Times)
China

A toddler in Eastern China had emergency surgery to remove a dead parasitic twin from his stomach.

Xiao Feng from Sichuan Province was rushed to hospital on Sept. 23 with an enlarged abdomen and breathing difficulties.

Using MRI scans and X-rays, doctors discovered that the boy had a very unusual condition called cryptodidymus, meaning there was a conjoined twin concealed inside his body.

Surgeons operated on Xiao to save his life, and found the 10-inch-wide fetus was taking up nearly two-thirds of its brother’s stomach. It weighed about 2 pounds, and had a fully formed backbone, and limbs with fingers and toes, according to ET Today.

A similar case occurred in Sichuan in 2007. Last year, a 3-year-old boy in Peru also had cryptodidymus in his abdomen, and the twin was found to have bones, eyes, and hair.