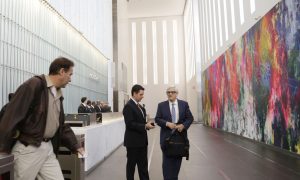 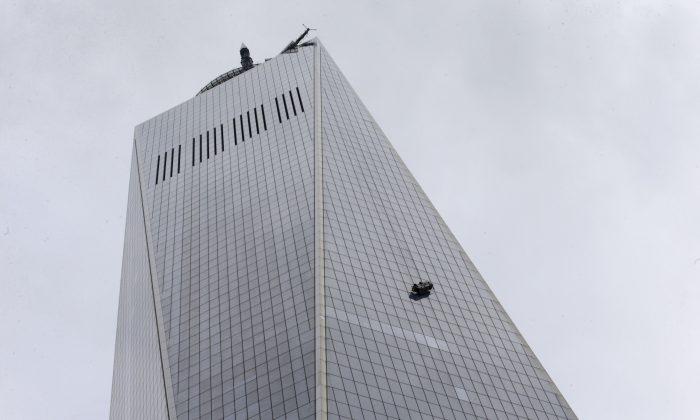 NEW YORK—Two men cleaning windows of the One World Trade Center building spent two frightening hours injured and hanging on for their lives 900 feet above ground Wednesday as one side of the suspension cables of their platform failed.

Firefighters, police, and Port Authority personnel managed to cut a hole through one of the windows and pulled the men to safety.

Both window washers, Juan Lizama, 41, and Juan Lopez, 33, were taken to Bellevue Hospital in serious, but not life-threatening condition, according to the city’s Fire Department representative.

The incident happened at 1:44 p.m. According to construction workers who were in the tower, one side of the cables that held the platform got loose at its rooftop fixture plunging the platform to a sharp angle.

One construction worker saw the platform outside the 38th floor and noticed it seemed unstable. “It was shaking already,” said the worker, wishing to remain anonymous.

The rescuers first tried to break through the window on the 69th floor from the inside, but the glass was too thick.

Plan B was to bring down another platform and pick up one trapped window washer at a time.

In the end rescue workers managed to cut a man-sized hole through three layers of glass. They used a special suction cup method to protect workers and people below from shattered glass.

That window washer story is among the scariest thing I have ever read. Also, probably a job I would not want to have.
— Katherine Albers (@KateAlbers78) November 12, 2014

Today would’ve been my last day as a window washer had this been me pic.twitter.com/ZqFkLRZdJ0

The authorities were in radio contact with the trapped men throughout the process.

A Bellevue spokesperson confirmed at 8:30 p.m. that both men were released from the hospital.

Last year two window washers got stuck on a platform at the Hearst Tower for an hour. Similarly, rescue workers cut a hole through a window and pulled them in.

In 2007 a window-washing platform fell 47 floors off the building at 265 E. 66th St. crashing to the pavement. One of two workers on the platform died.

In all three incidents the company in charge of the platform was Tractel. The company didn’t immediately responded to a request for a comment, but the U.S. Occupational Safety and Health Administration issued Tractel three citations following the 2007 incident, according to CityLab.com.