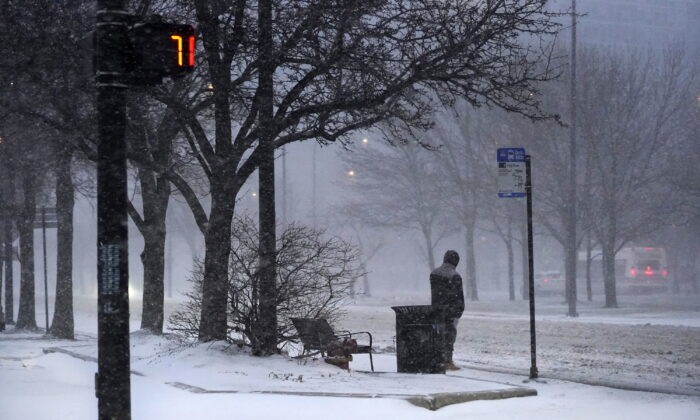 A transit rider waits for a bus as a winter storm descends upon Chicago, on Feb. 17, 2022. (Charles Rex Arbogast/AP Photo)
US News

2 Winter Storms to Hit Millions Across US This Week: Forecasts

The United States is facing two rounds of high-impact winter storms this week that will affect millions of people along its path, a weather forecasting service has warned.

The first storm, which is expected to last into Feb. 22, is forecast to strengthen as it sweeps from Oklahoma to Detroit, said Kirk Hinz, COO and chief meteorologist at private weather forecaster BAMWX, according to ZeroHedge.

Accumulating snow is anticipated in the Northern Plains and Upper Midwest, while in places such as Des Moines, Iowa, Milwaukee, and Chicago, the storm will bring ice along with it. Severe weather and excessive rainfall are predicted to occur between the Arkansas–Louisiana–Texas region and the Tennessee Valley.

The second storm, which will pass through later this week, is expected to be a more powerful event.

Regions most impacted by snowfall from the two storms through to the end of this week are said to be the Midwest, interior Northeast, and the Upper Plains. The region from Texas to the Midwest and to the Mid-Atlantic will be most affected by ice accumulation.

In the lower 48 states, average temperatures are predicted to fall on Feb. 22 and remain below the 30-year trend line for the remainder of February.

Several areas will have “record-breaking” temperatures, the NWS said in a weather forecast published on Feb. 21. In the Lower/Middle Mississippi Valley to Ohio Valley, temperatures are expected to be 10 to 25 degrees above average.

NWS predicts a low-pressure wave to move toward the Great Lakes by the evening of Feb. 22, and then into Quebec by morning the next day. A mixture of snow, sleet, and freezing rain might hit the region, possibly in two waves. The rate of snowfall is expected to be at one inch per hour or more.

“Total snowfall amounts will likely exceed 6 inches from the Dakotas into the Upper Great Lakes. More than 12 inches are possible in some areas over the two days,” the NWS said.

“Significant ice accumulations are possible into the Upper Midwest and Great Lakes starting Monday evening into Tuesday. Some areas may receive a quarter-inch of ice. Very cold air is expected for much of this week, with temperatures near record low values and dangerously cold wind chills in the Plains.”

In North Dakota and South Dakota, the NWS expects “near-blizzard conditions.” The agency has discouraged people from traveling.