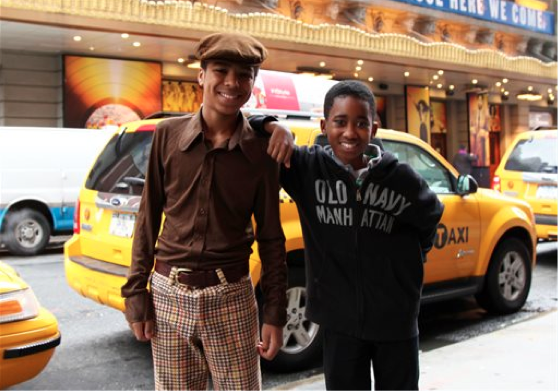 Actors Jibreel Mawry, left, and Raymond Luke Jr. pose outside the Lunt-Fontanne Theatre in New York, where their show "Motown: The Musical," is playing. The two 12-year-olds are alternating taking on the roles of young Michael Jackson, young Stevie Wonder and a young Berry Gordy. (AP Photo/Mark Kennedy)
Entertainment News

2 Teens Have a Ball Playing Michael Jackson on Broadway

“It’s a big step,” acknowledges a soft-spoken Jibreel backstage at the Lunt-Fontanne Theatre. “We went from local performances around town to Broadway.”

The musical portrays Motown’s first 25 years through the eyes of Gordy and is punctuated with a stunning collection of vintage hits and energetic dance numbers.

Jibreel, from Detroit, and Raymond, from Los Angeles, beat hundreds of hopefuls in a national search and now find themselves sharing a tiny dressing room in New York, juggling schoolwork and keeping up with last-minute changes to the show.

“I don’t think either one of them had ever seen a Broadway show prior to this,” says director Charles Randolph-Wright. “So to all of a sudden be starring in this show where you can’t get a ticket, in a theater with 1,500 seats, it’s quite a different thing from being in your high-school auditorium or the mall.”

A recent visit backstage revealed two happy, polite and remarkably talented youngsters. The door of Room 14 has both an official sign with their names in typeset letters and a homemade one just below with the word “Motown” in bright colored-in letters and their signatures.

Just as a visitor knocked, the sound of the boys singing was heard. They weren’t belting out Katy Perry or Kanye West. It was a pretty great version of “You Can’t Stop the Beat” from “Hairspray.”

“We have a lot of fun in here,” says Raymond.

Of the three roles they play, Michael Jackson is the toughest, requiring the most singing and dancing, including several classic Jackson Five hits like “I Want You Back” and “The Love You Save.”

They’ve studied footage of Jackson as well as his influences, including Jackie Wilson and James Brown. “Michael is someone who felt the music. He WAS the music,” says Raymond.

Adds Jibreel: “He was always so smooth onstage. He held back when he was offstage, but then when that spotlight hit him onstage, he was a whole different person.”

Jibreel was introduced to Jackson’s music at age 5 by his mother and has made several appearances mimicking the King of Pop. He helped teach Raymond the finer points, including to keep smiling and to keep moving.

“I wasn’t comfortable with smiling. I was the kind of singer that just stands still,” says Raymond. Of his co-star, he adds admiringly: “When he’s Michael, he’s like a whole other Michael. He’s like Michael Jr.”

Jibreel, whose YouTube handle is JuniorMJ1000, auditioned by sending in a video but, just to be sure, his family drove him to New York to audition in person as well. He was called back to join a workshop and then finally this winter got word he had landed the Broadway gig.

“I didn’t believe it when my mom told me,” he says.

Raymond, who led his church choir at 8, auditioned on camera in Los Angeles, singing “I Want You Back,” ”Loving You” and “I’ll Be There.” He was invited to New York to show off his stuff and was then offered the job just before Christmas break.

His mom got the call. “I just remember her crying, ‘You made it! You made it!'” he recalls. “I’ve been singing since I was 3, so it’s kind of amazing for me to actually be here. C’mon? New York? Broadway? That’s amazing.”

Randolph-Wright helped cast the show and sifted through audition videos as well as visiting Detroit, Atlanta and Los Angeles to see candidates up close. He says he knew he had found gold as soon as Jibreel and Raymond walked in.

“It’s daunting to have to play any one of those three characters. To have to do all three of them is, of course, insane,” he says. “It’s thrilling to see them grow and change and discover what it means to be on Broadway.”

Both hope a show-biz career awaits them. Raymond is a veteran of Toys R Us and Volkswagen commercials, and Jibreel plans on finishing his debut album of pop and R&B songs.

Each boy has a parent in the city watching over him, as well as Lisa Swift, their teacher, who tries to squeeze in as many online lessons as possible in between choreography tuneups. Jibreel, in sixth grade, and Raymond, in seventh, are required to get three hours of schooling for every day of classes they miss.

The show keeps changing — a recent cut scrapped the only young Stevie Wonder tune “Fingertips” from the musical — and yet the boys still keep their sense of humor.

Inadvertently funny things said backstage get written on a quote board tacked to a wall in their dressing room. One entry gently needles their good-natured teacher. “Ms. Lisa,” Raymond once said. “It doesn’t matter how old you are, you can still bring it.”

The same, it could be said, applies to Raymond and Jibreel.