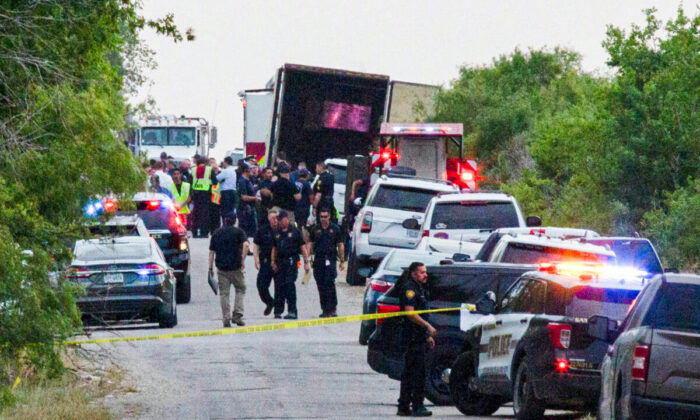 Law enforcement officers work at the scene where people were found dead inside a trailer truck in San Antonio, Texas, on June 27, 2022. (Kaylee Greenlee Beal/Reuters)
Crime and Incidents

Two illegal aliens from Mexican allegedly linked to the deadly smuggling operation that left 51 men and women dead in the back of a sweltering semi-trailer in Texas were charged by federal prosecutors with firearm-related offenses on Tuesday.

According to court documents filed in the U.S. District Court in the Western District of Texas, Juan Francisco D’Luna-Bilbao and Juan Claudio D’Luna-Mendez were charged with possessing firearms while residing in the United States illegally. Both had overstayed their B-2 visas. Their first hearing will be held on July 1.

The men were discovered after authorities traced the truck’s registration to a San Antonio residence that was then put under surveillance, the complaint states.

The men were seen exiting the residence in separate vehicles after which they were pulled over by police and two of the guns were discovered. After obtaining a search warrant, more firearms were discovered in the house. Each suspect is charged with three firearms offenses, each of which carries a sentence of up to 10 years in prison and up to $250,000 in fines.

A third suspect, described as a U.S. citizen, who reportedly drove the truck, has not yet been charged but was taken into custody and remains in hospital.

Prosecutors have requested the two Mexican suspects be held without bond.

The bodies of 46 illegal immigrants were discovered in the back of a semi-trailer on the outskirts of San Antonio on Monday in what U.S. and Mexican authorities described as the deadliest human smuggling incident in recent times.

Sixteen individuals, a mix of adults and minors, who were found alive in the truck were transported to the hospital, where an additional four later died.

Temperatures at the location where the truck was found, near some train tracks, had swelled to a high of 103 Fahrenheit (around 39 Celsius).

The nationalities of the 51 dead included Mexicans, Guatemalans, and Hondurans, according to Immigration and Customs Enforcement (ICE). The agency didn’t provide information about the nationality of the remaining passengers.

Mexican President Andrés Manuel López Obrador on Tuesday said poverty in the victims’ home countries and U.S. border security problems were to blame for the incident.

“These unfortunate events that of course have to do with the situation of desperate poverty of our Central American brothers, and of Mexicans,” he said during his daily briefing. “[It] happens because there is also human trafficking and lack of controls, in this case, on the border with the United States and inside the United States.”

“These deaths are on Biden. They are a result of his deadly open border policies. They show the deadly consequences of his refusal to enforce the law,” he wrote on Twitter.

But the White House disagrees that the southern border is open, with White House press secretary Karine Jean-Pierre telling reporters, “The fact of the matter is the border is closed.”

On Tuesday, Biden described the incident as “horrifying and heartbreaking” in a statement in which he vowed to crack down on the multi-billion-dollar criminal smuggling enterprises that have helped fuel a record number of migrant crossings at the U.S.-Mexico border since he took office in January 2021.