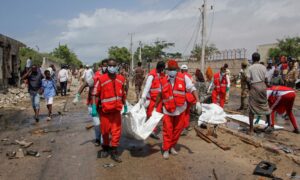 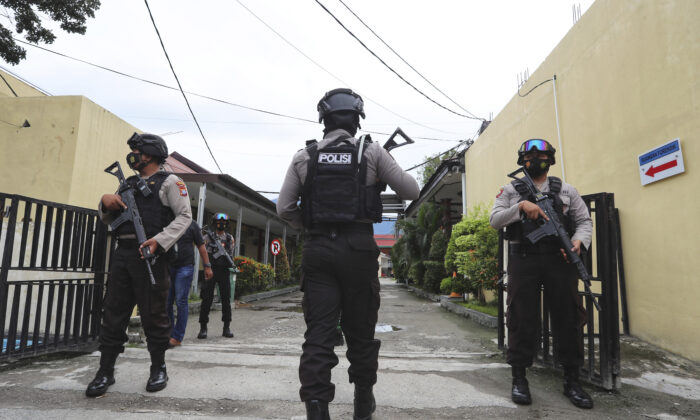 Police officers stand guard at a local police hospital where the bodies of militants killed during a raid were taken to, in Palu, Central Sulawesi, Indonesia, on July 11, 2021. (Josua Marunduh/AP Photo)
Asia & Pacific

PALU, Indonesia—Indonesian security forces on Sunday killed two suspected terrorists with ties to the ISIS terrorist group who were believed to be connected to the killing of Christian farmers on Sulawesi island, the country’s military said.

Security operations in Central Sulawesi have intensified in recent months to try to capture members of the East Indonesia Mujahideen terrorist network, particularly targeting Ali Kalora, the group’s leader and Indonesia’s most wanted terrorist. The network pledged allegiance to ISIS in 2014.

Tampubolon said the security team located the terrorist camp on Wednesday in the densely forested village of Tanah Lanto.

The team was able to approach the camp early Sunday with five terrorists inside, however three terrorists escaped the firefight into the jungle, Tampubolon said in a statement.

He said security forces were still searching for the seven remaining members of group who are still at large, including Kalora.

The East Indonesia Mujahideen has claimed responsibility for several killings of police and Christians.

In May, the group killed four Christians in Kalemago village of Poso district, including one victim who was beheaded. Authorities said the attack was in revenge for the killing in March of two terrorists, including the son of the group’s former leader Abu Wardah Santoso.

Kalora’s predecessor was killed by security forces in July 2016. Dozens of other leaders and members of the group have been killed or captured since then.

Indonesia, the world’s most populous Muslim-majority nation, has conducted a sustained crackdown on radical Islamic terrorists since bombings on the tourist island of Bali in 2002 killed 202 people, mostly foreigners.

Attacks on foreigners have been largely replaced by smaller, less deadly strikes targeting the government, police, and anti-terrorism forces.