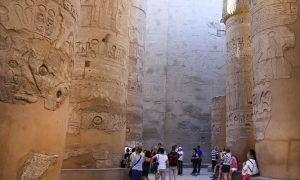 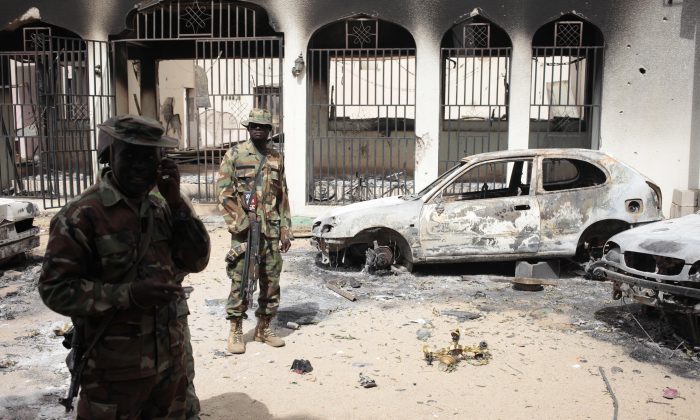 Nigerian soldiers stand guard in front of the burned out palace of the Emir of Gwoza, in Gwoza, Nigeria (AP/Lekan Oyekanmi)
Africa

It is the fourth attack in a week in which at least 162 people have been killed, including four suicide bombers, as Boko Haram Islamic extremists appear to obey an ISIS group order to step up attacks in the holy month of Ramadan. Nigeria’s homegrown extremist group became the ISIS group’s West Africa franchise earlier this year.

In the most deadly attack, the militants targeted several mosques in Kukawa town on Wednesday, gunning down nearly 100 praying worshippers. Kukawa is 180 kilometers (110 miles) northeast of Maiduguri, the biggest city in the northeast.

The militants, who want to impose their strict version of Shariah law across Nigeria, often defile mosques where clerics preach against their extremism. While they also have attacked churches, many more Muslims are among an estimated 13,000 people killed in the 6-year-old Islamic uprising. Amnesty International puts the toll at 17,000 dead. Another 1.5 million people have been driven from their homes.

The latest attacks took place at Malari village, just outside Maiduguri, and began with an explosion from a teenage girl at the market that killed at least 10 people, said security guard Abba Shehu.

Minutes later a woman in a taxi blew up at a military checkpoint and killed a soldier and two passengers.

There are fears Boko Haram is using some of its thousands of captives as weapons.

Boko Haram took over a large swath of northeastern Nigeria last year and stepped up cross-border raids. Nigeria and its neighbors deployed a multinational army that forced the militants out of towns and had them hemmed into the Sambisa Forest.

But bombings and village attacks have increased in recent weeks.