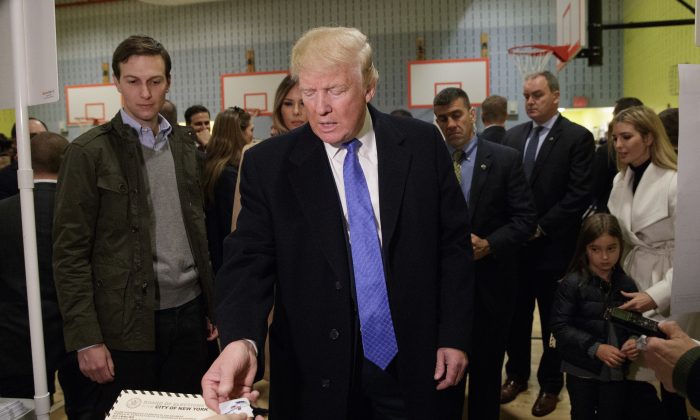 Republican presidential candidate Donald Trump is handed a sticker before casting his ballot at PS-59, in New York on Nov. 8, 2016. (AP Photo/ Evan Vucci)
US

SAN ANTONIO—Two 10th-grade students at a San Antonio high school and their teacher have been reprimanded for the performance of a skit portraying the assassination of President-elect Donald Trump.

The San Antonio Express-News reports the skit, titled “The Assassination of Donald Trump,” was performed last week at Marshall High School. One of the boys used a gunfire sound effect from a cellphone; the other boy, playing Trump, fell to the ground.

Barry Perez, spokesman for the Northside Independent School District, said the “appropriate action” had been taken against the three, and that the teacher had apologized.

Harold and Melinda Bean, parents of a student who viewed the skit, complained to district officials. They said they are dissatisfied with the district action and had hoped for harsher measures.