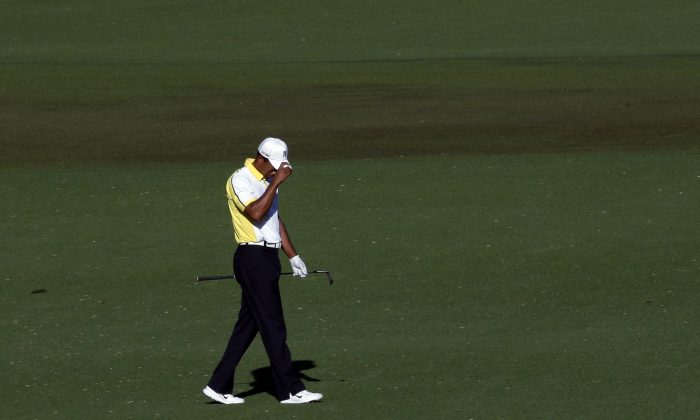 Tiger Woods reacts after his fairway shot on the 15th hole hit the pin and rolled into the water during the second round of the Masters golf tournament Friday, April 12, 2013, in Augusta, Ga. (AP Photo/Charlie Riedel)
Golf

2-shot Penalty for Woods, No Disqualification

AUGUSTA, Ga.—Tiger Woods received a two-shot penalty April 13 after officials deemed his April 12 drop during the second round of the Masters Tournament to be improper. Woods now drops to 1-under through 36 holes but can stay in the tournament, according to the Augusta Golf Club website.

Woods’ third shot from 87 yards hit the pin and caromed off the green, down the slope and into the water. Instead of going to the drop area on the other side of the water, Woods chose to take the one-shot penalty and play his fifth shot from the area of his original shot.

Officials found that Woods violated Rule 26-1, which states that the ball should be dropped as nearly as possible to the spot where it was last played.

Rules stipulate three options for the designated drop zone: The designated drop zone, on the line keeping the point where the ball entered the water between his drop point and the pin, or “near as possible” to his original spot. He could have faced disqualification for signing an incorrect score.

“I went back to where I played it from, but went two yards further back and I tried to take two yards off the shot of what I felt I hit,” Woods said Friday after he signed for a 71, leaving him three shots out of the lead. “And that should land me short of the flag and not have it either hit the flag or skip over the back. I felt that was going to be the right decision to take off four (yards) right there. And I did. It worked out perfectly.”

Woods’ fifth shot landed short of the hole and spun to a stop about 4 feet to the left of the flag. He made the putt for a bogey.

Woods began his year with a rules situation in Abu Dhabi. He took relief from an embedded lie in a sandy area covered in grass. He was entitled to a free drop except in sand, and Woods was given a two-shot penalty. He was alerted of this before he signed his card, and the two-shot penalty caused him to miss the cut.

Woods, the No. 1 player in the world, was the favorite coming into the Masters to end five years without winning a major. He has not won the Masters since 2005.